Republican presidential candidate Donald Trump waves to the crowd after speaking during a rally opposing the Iran nuclear deal outside the Capitol in Washington, on Sept. 9, 2015.
Susan Walsh—AP
By Alex Altman

The old gang got back together on Wednesday outside the U.S. Capitol. They showed up waving Israeli flags, Gadsden flags, American flags and the usual motley collection of hand-lettered signs that combine to offer a peek into the Republican Party’s angry id: Benghazi references, Hitler references, haters of Hillary Clinton, broadsides at President Obama. Men turned up in tricorn hats. Sarah Palin punctuated a procession of more than 40 scheduled speakers, from talk-radio bigwigs to Tea Party leaders. Glenn Beck posted up in a corner of the press pen. For a few hours on a scorching late-summer afternoon, it felt like 2010 again.

What the fringe of the conservative movement lacked then was a leader. For now, they appear to have one in Donald Trump.

Striding onstage to R.E.M.’s “It’s the End of the World As We Know It,” the real estate mogul uncorked his usual brand of patriotic braggadocio. “We are led by very, very stupid people,” Trump declared, drawing roars from the crowd. “We will have so much winning when I get elected that you may get bored with winning.”

For all its theatrics, Wednesday’s rally at the Capitol had the look of a lost cause. Hosted by the Tea Party Patriots—one of the original stalwarts of a movement whose clout has waned since the Republican takeover of 2010—it was designed to galvanize opposition to Obama’s Iran nuclear deal. But the White House has since secured the support of at least 42 Democratic senators, enough to ensure a major political victory for the President. The seemingly inevitable outcome, coupled with the sweltering heat, produced an enthusiastic but relatively sparse crowd, pockets of which huddled around the edges of the west lawn in search of shade.

Trump was there at the invitation of Ted Cruz, the rally’s original headliner and a rival for the 2016 Republican nomination. Cruz, who has sidled up to Trump by way of a transparent bid to court the real-estate mogul’s supporters, was relegated to a supporting role at the rally by the star power of the Republican frontrunner.

Speaking immediately before Trump, the Texas Senator unleashed a dire denunciation of a “catastrophic” Iran pact that he said would make the Obama Administration “quite literally the world’s leading financier of radical Islamic terrorism.”

If the deal goes through, Cruz said, “people will die.”

Cruz asked attendees at the rally to channel their frustration into a campaign to pressure Mitch McConnell and John Boehner to stop the accord by any means necessary. The mere mention of the names of the two GOP congressional leaders drew a chorus of boos from the crowd gathered at the foot of the Capitol.

Inside the party faithful were equally restive. Rank-and-file House Republicans appeared on Wednesday to have scuttled a plan for a simple vote of disapproval against the Iran deal. It was another in a string of setbacks for Boehner, who has long struggled to corral his fractious House majority, as well as a sign of the difficult path to reach an agreement that would keep the government open beyond Sept. 30, when its funding is set to expire. At least 28 House Republicans have signed a letter threatening a government shutdown if that spending bill includes money for Planned Parenthood.

Despite the crowded legislative agenda, outside on the lawn the issues seemed less important than the candidates’ ability to channel the crowd’s passions. Take Howard Glickman, who came to Washington from Philadelphia wearing an Israeli flag like a cape. Glickman is a fierce foe of the Iran deal. But like many in the crowd, he was a Trump supporter, even though the developer (unlike Cruz) won’t promise to rip up the pact on day one in the White House. Trump, says Glickman, is “the only one who doesn’t take any money from anybody.”

As Trump took the stage, he received a hug and a handshake from Cruz, who credited the developer for attractive media hordes to cover the cause. For now, the pair seem comfortable with a consciously symbiotic relation. “There is a little romance between us,” Trump joked, according to the New York Times. But Cruz is reminding conservatives that he is a proven warrior, not a flavor of the moment, and if his play for Trump’s supporters succeeds the love affair will surely fade.

After their speeches the two candidates drew dueling press scrums that seemed a symbol of their campaigns. Cruz, beads of sweat forming on his upper lip in the heat, held forth at for the cameras, doling out on-message sound bites about the perfidy of the “Washington cartel.” The bigger crowd flocked to Trump, who quickly waded through a crush of grasping fans beneath a canopy of boom mics.

“They are a party in disarray,” House Democratic Leader Nancy Pelosi suggested to a group of reporters gathered in her office at the Capitol, “and I think the fact that Donald Trump has emerged is emblematic of that.” 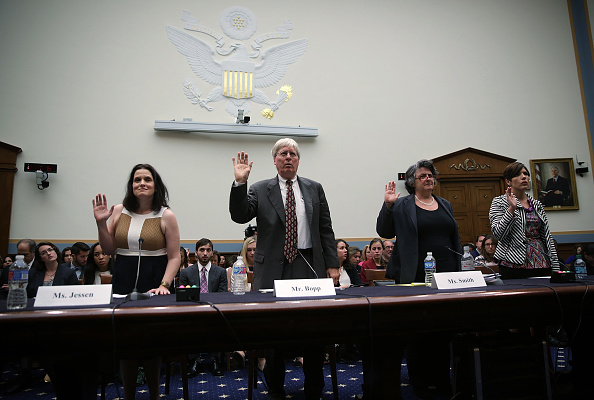