The Surprising Ways Queen Elizabeth Has Become a Cultural Icon

On September 9th, Queen Elizabeth became the longest-reigning monarch in Britain’s history, passing Queen Victoria, who reigned for 63 years and 215 days and her namesake, Queen Elizabeth I, who reigned for a paltry 44 years and 147 days. The Victorian era and the Elizabethan era spawned recognized cultural movements, with literature and artifacts that are recognized to this day. What will be the cultural legacy of QEII?

If many of the works inspired by the first two monarchs are acknowledged masterpieces, the second Elizabeth wins hands down on quantity. Her current Majesty is very likely the most portrayed woman on the planet. Her head, by law, has been on every British stamp since she ascended the throne. Billions of stamps, millions of coins and notes, and hundreds of thousands of postcards bear her likeness. Her face, especially in profile, is recognized in every English speaking land and is ubiquitous in several. It is not the exotic, come-hither face of a Marilyn or an Angelina. It’s the face of distant historic authority, a literal figurehead, having no real power but oodles of symbolic supremacy.

Does ubiquity equal influence? The Queen does not inspire purchases the way Kate Moss or Kate Middleton might. She cannot give the sales of a certain brand of lipstick a fillip by casually dropping its name in conversation. But her complete lack of sex appeal or commercial appeal is actually the Queen’s strength; it buttresses her rarer and more potent qualities: consistency and longevity. Whatever flavor of the month Kate Middleton may be, it’s never going to be as durable as the Queen’s regal vanilla.

Officially, Elizabeth II has sat for roughly 200 portraits by artists from Annie Leibovitz to Lucian Freud to hologram creator Chris Levine. She never gives her opinion on the results—at least not publicly—and seems to regard lending her time to artists as part of her cultural duty. The painters don’t get to know their subject, because she can never be a subject. One artist—Justin Mortimer, whose portrayal stirred up controversy because it separated her head from her body—had two two-hour sittings with the
Queen, mostly to take Polaroids and make sketches. “She sat very formally (like a Queen) in her chair and was chatting nonstop to her equerry,” he recalled afterwards. The second session was more relaxed but not intimate. ‘We even talked. She was funny.”

Of course, the Queen’s official portraits, even those by masters such as Freud, are nowhere near as culturally relevant as her uncommissioned portrayals. She’s vastly more influential as an icon than as a patron. As the apogee of all that is British and institutional and proper, Her Majesty serves as a useful target. Unchanging and unknowable, she is a perfect canvas on which to project the obsessions of the moment. Andy Warhol’s silkscreen prints of Elizabeth, part of his Reigning Queen series of the mid ‘8os, treats her like any other celebrity, frozen in time and bright colors. Even earlier, Jamie Reid gave her a baby pin through her nose, like a ‘7os punk. And most recently, there she is, rendered as a pinup by street artist Pegasus.

It was Reid, too, who created the 1977 cover for the Sex Pistols single “God Save the Queen,” which has become part of a robust body of work that defaces the Queen’s image as a shorthand for rebellion or anti-establishment passion. The British TV show Spitting Image (1984-96) used puppets to mock the royals, making them look them dim or harried. In the late ‘9os, another show, The Royle Family, followed the escapades and interactions of a family that mirrored the Windsors in uncanny ways—right down to the fact that both clans lived off the government—except the Royles were broke.

More recently the mock-the-Queen approach has fallen out of vogue, with such artists as Alison Jackson examining instead the strangeness of the public appetite for intimate or embarrassing details about the royal family. Jackson gets lookalike actors to pose as, say, the Queen on the toilet reading a newspaper and photographs them in paparazzo style. The juxtaposition is uncomfortable, confronting readers with their own voyeurism: In a world full of artifice masquerading as reality, what images of the western world’s most gilded family do we seek out and create?

Perhaps the most interesting evolution of the Queen’s cultural impact can be seen in the fashion industry. Her clothing choices, never considered avant-garde or even fashion forward, can be most generously described as safe. Under the risible headline “Elizabethan look may capture Fashion World,” the Pittsburgh Press of February 1952 praised the Queen’s fashion choices and her “dainty waist and slim hips” but noted that Norman Hartnell, one of the couturiers to the Crown, said that “no member of the royal family intends to influence fashion.” If that was her aim, it has been one of the Queen’s most successful and lasting campaigns.

The point of Her Maj’s wardrobe is pretty much to wear what no one else will. She dons bright colors and bold prints so she can be easily spotted in a crowd. This tends to send the royal dresser to a lot of fuchsias, primrose yellows and purples-and so much the better if those colors aren’t fashionable.

Because she cannot under any circumstances be underdressed, the Queen will often wear matching hat, coat and gloves. For a long time this extreme matchiness was considered the leading edge of frumpiness. But over the years, the Queen’s highly coordinated, color-saturated look began to appeal to other women, particularly those in positions of prominence without power. Michelle Obama wears similar hues and bright patterns (witness the matching yellow dress-and-coat ensemble she wore to her husband’s inaugural parade, very similar to the Queen’s regular get up.).

The trickle-down effect has spilled over onto women who like to be contrary: Uber-hip
British model Agyness Deyn cited the sovereign as her fashion icon. ‘’The Queen dresses all matching;’ noted Japanese Vogue editor-at-large Anna Delio Russo. “What incredible impact that has. No one else dresses all in pink without looking hilarious, but she does. She pulls it off.” Even the Queen’s conspicuously dowdy casual wear, with its range of head scarves, wool skirts and knee socks, has been aped; it was the inspiration for Dolce & Gabbana’s fall 2008 ready-to-wear line.

All this must be very reassuring to a monarch in her twilight years. She doesn’t have to change to keep up with the times. If she just stays as she is, the times will circle back to her.

A version of this story first appeared in the Time-Life Book, The Royal Family. 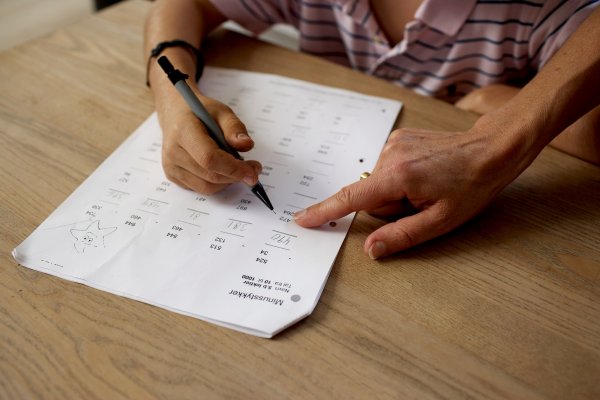 Why You Should Think Twice About Helping Your Kid With Math
Next Up: Editor's Pick