The 10 Most Ridiculous Scientific Studies

Illustration by Sydney Rae Hass for TIME
Ideas
By Jeffrey Kluger
Jeffrey Kluger is Editor at Large for TIME magazine and the author of ten books, including Apollo 13, Apollo 8 and two novels for young adults. He has written more than 40 cover stories for TIME on topics ranging from space to human behavior to climate to medicine. Along with others at TIME, Kluger is an Emmy nominee for the web series A Year in Space.

Important news from the world of science: if you happen to suffer a traumatic brain injury, don’t be surprised if you experience headaches as a result. In other breakthrough findings: knee surgery may interfere with your jogging, alcohol has been found to relax people at parties, and there are multiple causes of death in very old people. Write the Nobel speeches, people, because someone’s going to Oslo!

Okay, maybe not. Still, every one of those not-exactly jaw-dropping studies is entirely real—funded, peer-reviewed, published, the works. And they’re not alone. Here—with their press release headlines unchanged—are the ten best from from science’s recent annals of “duh.”

Study shows beneficial effect of electric fans in extreme heat and humidity: You know that space heater you’ve been firing up every time the temperature climbs above 90º in August? Turns out you’ve been going about it all wrong. If you don’t have air conditioning, it seems that “fans” (which move “air” with the help of a cunning arrangement of rotating “blades”) can actually make you feel cooler. That, at least, was the news from a study in the Journal of the American Medical Association (JAMA) last February. Still to come: “Why Snow-Blower Use Declines in July.”

Study shows benefit of higher quality screening colonoscopies: Don’t you just hate those low-quality colonoscopies? You know, the ones when the doctor looks at your ears, checks your throat and pronounces, “That’s one fine colon you’ve got there, friend”? Now there’s a better way to go about things, according to JAMA, and that’s to be sure to have timely, high quality screenings instead. That may be bad news for “Colon Bob, Your $5 Colonoscopy Man,” but it’s good news for the rest of us.

Holding on to the blues: Depressed individuals may fail to decrease sadness: This one apparently came as news to the folks at the Association for Psychological Science and they’ve got the body of work to stand behind their findings. They’re surely the same scientists who discovered that short people often fail to increase inches, grouchy people don’t have enough niceness and folks who wear dentures have done a terrible job of hanging onto their teeth. The depression findings in particular are good news, pointing to exciting new treatments based on the venerable “Turn that frown upside down” method.

Quitting smoking after heart attack reduces chest pain, improves quality of life: Looks like you can say goodbye to those friendly intensive care units that used hand out packs of Luckies to post-op patients hankering for a smoke. Don’t blame the hospitals though, blame those buzz-kills folks at the American Heart Association who are responsible for this no-fun finding. Next in the nanny-state crosshairs: the Krispy Kreme booth at the diabetes clinic.

Older workers bring valuable knowledge to the job: Sure they bring other things too: incomprehensible jokes, sensible shoes, the last working Walkman in captivity. But according to a study in the Journal of Applied Psychology, they also bring what the investigators call “crystallized knowledge,” which comes from “knowledge born of experience.” So yes, the old folks in your office say corny things like “Show up on time,” “Do an honest day’s work,” and “You know that plan you’ve got to sell billions of dollars worth of unsecured mortgages, bundle them together, chop them all up and sell them to investors? Don’t do that.” But it doesn’t hurt to humor them. They really are adorable sometimes.

Being homeless is bad for your health: Granted, there’s the fresh air, the lean diet, the vigorous exercise (no sitting in front of the TV for you!) But living on the street is not the picnic it seems. Studies like the one in the Journal of Health Psychology show it’s not just the absence of a fixed address that hurts, but the absence of luxuries like, say, walls and a roof. That’s especially true in winter—and spring, summer and fall too, follow-up studies have found. So quit your bragging, homeless people. You’re no healthier than the rest of us.

The more time a person lives under a democracy, the more likely she or he is to support democracy: It’s easy to fall for a charming strong-man—that waggish autocrat who promises you stability, order and no silly distractions like civil liberties and an open press. Soul-crushing annihilation of personal freedoms? Gimme’ some of that, big boy. So it came as a surprise that a study in Science found that when you give people even a single taste of the whole democracy thing, well, it’s like what they say about potato chips, you want to eat the whole bag. But hey, let’s keep this one secret. Nothing like a peevish dictator to mess up a weekend.

Statistical analysis reveals Mexican drug war increased homicide rates: That’s the thing about any war—the homicide part is kind of the whole point. Still, as a paper in The American Statistician showed, it’s always a good idea to crunch the numbers. So let’s run the equation: X – Y = Z, where X is the number of people who walked into the drug war alive, Y is the number who walked out and Z is, you know, the dead guys. Yep, looks like it adds up. (Don’t forget to show your work!)

Scientists Discover a Difference Between the Sexes: Somewhere, in the basement warrens of Northwestern University, dwell the scientists who made this discovery—androgynous beings, reproducing by cellular fission, they toiled in darkness, their light-sensitive eye spots needing only the barest illumination to see. Then one day they emerged blinking into the light, squinted about them and discovered that the surface creatures seemed to come in two distinct varieties. Intrigued, they wandered among them—then went to a kegger and haven’t been seen since. Spring break, man; what are you gonna’ do? 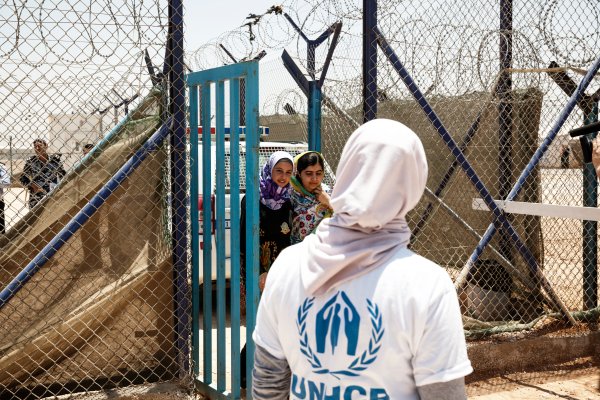 The World's Response to Refugees Has Been Pitiful
Next Up: Editor's Pick