Here's Why Parents Are Angry at Nest

It’s the kind of situation that would be funny if it wasn’t true. Monday, while my wife and baby were napping, a friend was planning to swing by my house to drop off a flash drive full of files (yes, this is how tech journalists spend their Labor Day holidays). But rather than ring the doorbell, alert the dog, and wake the family, he offered to slip it under the door mat instead.

“I wish I had a false brick so you could make the drop like a spy,” I jokingly told him.

Then, as I waited and watched for him to arrive through the Dropcam security camera pointed at my front yard, the camera’s feed cut out. Minutes later he texted me, “The drop has been made.”

Though it seemed like he hacked my camera, the video feed outage wasn’t funny then, nor hours later when another Dropcam—the one in the nursery—was still down. I closed and reopened the Nest iPhone app, rebooted my phone, and even switched to the iPad to see if the video was viewable there. Alas, no. Soon after, I discovered dozens of other Nest customers complaining on Twitter—it seemed that all of our Dropcams were down. The problem seemed to be a server issue, and waiting was the only thing we could do.

According to a Nest spokesperson, the company’s services experienced an outage on Monday evening, an issue that stretched beyond camera feeds to its other smart home products as well. While the Nest Learning Thermostat and Nest Protect devices remained fully functional, their remote control and remote alerts were unavailable for approximately four hours, says the company. Nest Cam (and Dropcam) live streaming was also unavailable. But the company says cloud recording was not disrupted, and customers with Nest Aware + Video History can look back to see footage recorded during the outage. In other words, Nest could see our feeds (not that they’d look), but we couldn’t.

Read more: I used the best home security camera available — and it freaked me out

Nest Cam and Dropcam outages have at least felt more frequent and certainly been more frustrating for users over the past year. And that’s an important timeline, since Nest bought Dropcam in June of last year for $555 million, just months after Google bought Nest for $3.2 billion. Scouring Twitter for clusters of complaints (and jogging my own memory), Nest’s service had at least three major outages in the past year: in November 2014, mid-April 2015, and a third this past week.

This is a problem that pains many Nest web security camera users, but perhaps none more than parents of small children. Promoted as a secure alternative to traditional baby cams, Dropcam and Nest Cam use bank-level encryption to ensure that videos of sleeping babies can only be accessible by mom and dad, and not random hackers or neighborhood pranksters. In fact, last week when new security flaws for several baby monitors were revealed, Nest got a boost simply by not being on the list. One of the researchers even admitted that he uses a Nest camera himself.

But it would seem reliability is the cost of security. While three, multi-hour outages in a nine-month period may sound reasonable to most people, they are hugely problematic for anyone who relies on that service. Tell sleep-deprived, first-time parents who have just moved their baby into his or her own room that a couple hours without infrared surveillance is no big deal, and watch how fast they can tear you to pieces armed only with Sudden Infant Death Syndrome (SIDS) statistics.

And for even the most expert of users it’s a situation that’s beyond frustrating because it’s so difficult to troubleshoot. When a web-connected camera goes down, it’s possible there could be a problem with the device itself, or the Wi-Fi network it’s connected to, or the high-speed modem that provides the data. And given the inconsistency of most peoples’ Internet connections, those would be reasonable places to look first.

But in the case of Nest and Dropcam, it’s become clear that weakest link may be behind Nest’s (or Google’s) own walls. Over the past year, I’ve even noticed quality differences between Nest’s iPad app and it’s iPhone app. Simultaneously testing one camera on both an iPad 4 and an iPhone 5 both on the same network can provide wildly different video quality. Specifically, my iPad would freeze and then race to catch up (or just stall out completely) while the iPhone worked just fine.

Problems like these have been hard for many Dropcam loyalists like myself to swallow, because before Nest bought the company, the cameras worked well. Staffed by fewer than 200 people, Dropcam ran a good service with an app that was easy to use. Since Nest has taken over, the service has introduced intermittent outages and the Dropcam app has been relaunched with a much less intuitive, Nest-branded user interface.

But this is life in the cloud—the web-connected product you bought yesterday could change tomorrow, without warning and with little choice. If anyone could understand this concept you’d think it would be parents, of all people. We bring a little bundle into our homes and expect it to mature and gain new capabilities over time. No one goes into this whole thing expecting to raise a fussy grouch that melts down when we need it to behave most.

“At Nest, we work hard to give our customers the best products and services possible,” says the Nest spokesperson. “Our engineering teams are working to determine the source of this issue so it doesn’t happen again.” On behalf of sleep-starved parents everywhere, I hope so. 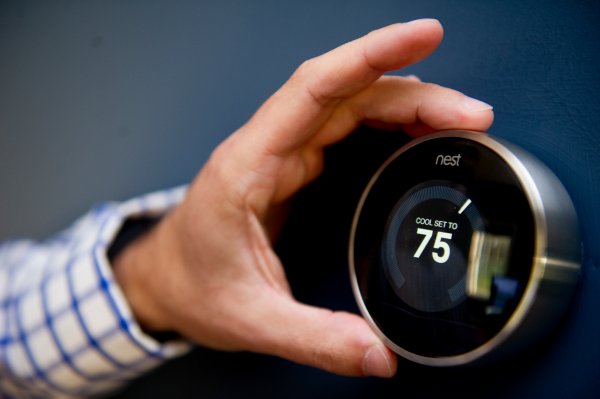 Here's What It's Like to Have the Smartest Home in Town
Next Up: Editor's Pick