Rowan County Clerk Kim Davis, with Republican presidential candidate Mike Huckabee at her side, greets the crowd after being released from the Carter County Detention Center on Sept. 8, 2015, in Grayson, Ky.
Timothy D. Easley—AP
By Philip Elliott

When Rowan County Clerk Kim Davis marched triumphantly out of a Kentucky jail Tuesday afternoon after six days, she was flanked by perhaps her most high-profile champion: Republican presidential hopeful Mike Huckabee.

“I love you all so much,” she whimpered into a microphone Huckabee had handed her. As she doubled-over in emotion, Huckabee put his arm around the elected clerk, who was jailed for refusing to issue marriage licenses to same-sex couples. After she finished her brief remarks to hundreds of supporters, the candidate clasped her right hand and hoisted it over his head, as though he was introducing his running mate at a nominating convention.

Indeed, the Davis case might be just the political partner the former Governor and retired Baptist pastor has been seeking. Although Huckabee remains a popular figure among Christian conservatives, a key segment of the GOP, that affinity is not translating to support in the polls. A Des Moines Register/ Bloomberg Politics poll finds that Huckabee—the winner of 2008’s Iowa Caucuses—has a 61% favorability rating in Iowa, yet just 4% support as caucusgoers’ first choice.

Huckabee now is trying to jolt Republicans into supporting him again. As a cast of political newcomers such as Florida Sen. Marco Rubio and Wisconsin Gov. Scott Walker have claimed headlines, Huckabee at times has seemed like a has-been figure making one last run at the White House from the fringes. Others, such as former Florida Gov. Jeb Bush and Kentucky Sen. Rand Paul, have tapped into deeper reserves of political advisers and consultants. And Donald Trump, the outsized personality who is atop the polls, is simply a more compelling campaigner.

Yet Huckabee is giving The Donald a go for that role. In the week since a federal judge ordered Davis to jail for refusing to comply with a Supreme Court ruling that expended same-sex marriage across the country, the former Arkansas governor has found new life. His Lazarus moment has included a testy exchange with ABC’s George Stephanopoulos, a comparison of Davis to Abraham Lincoln, and an offer to go to jail in her place. “You obey it—if it’s right,” Huckabee said when asked if elected officials had a duty to follow court rulings.

That pluck and defiance is what Republican voters are looking for in a candidate, at least at this point in the presidential campaign where any ballots are still almost five months away from being cast. Trump exudes that rowdiness, for sure, but some of the party’s other figures have their fair share of it. Texas Sen. Ted Cruz, for instance, tried to crash the Davis rally that Huckabee’s aides had put together. A Huckabee aide barred Cruz from taking part and relegated the typically brash Cruz to standing on the sidelines and posting a photo of his meeting with Davis on Instagram. He would have to wait until Wednesday’s rally at the U.S. Capitol—this one against the proposed deal with Iran on its nuclear ambitions—to crow before the cameras with Trump as his apprentice.

For his part, Huckabee was counting on the rarely seen pique to help him rebound after a languid summer. Next week’s debate at the Reagan Library in California offers another chance for the candidate to appear before millions of voters in primetime, and Huckabee has been honing some of his answers in an effort to appear feistier.

Some of that edge has come through in recent days. “If you have to put someone in jail, let me go,” Huckabee volunteered as he warmed up the crowd outside the Carter County Detention Center. The crowd, many waving white crosses, cheered wildly. “I’m tired of seeing people be harassed just because of their faith,” Huckabee later told reporters.

And therein lies Huckabee’s opening. Voters are frustrated. They feel the government is not fighting for them; witness Trump’s meteoric rise after going after immigrants, or the fascination with New Jersey Gov. Chris Christie’s “tell it like it is” bluntness. Cruz and former Pennsylvania Sen. Rick Santorum have pitched their campaigns as quests to end Christians’ persecution.

Huckabee, by contrast, has long taken a tempered tone, especially when talking about his faith. During a 2007 debate, he bristled at a question about his views on evolution: “If they want a President who doesn’t believe in God, there’s probably plenty of choices.” Pressed if God created the world in six days as the Bible says, Huckabee deadpanned: “I don’t know, I wasn’t there.”

Nowadays, there is none of that nuance. “People are in a seething rage because they’re tired of the duplicity of one set of rules for the elites, a set of rules for those who are in power, and a totally different set of rules for the people, the working stiffs out there who every day feel like they’re taking in the teeth,” Huckabee told Fox News in an interview. His most recent book, “God, Guns, Grits, and Gravy,” is aimed at the party’s base. His 2007 campaign biography, meanwhile, had the sunnier title “From Hope to Higher Ground.”

Huckabee is betting that “seething rage” translates to more votes than hope.

Among Christian conservatives, that outrage has no signs of calming. A Register/ Bloomberg analysis of Iowa’s caucusgoers suggests this is good news for Huckabee, their onetime favorite. Among the four main groups of voters there, Christian conservatives are the largest block; 39% of the caucusgoers fit this description. Those voters, Huckabee advisers suggest, are unlikely to stick with the thrice-married Trump who they argue doesn’t share their values.

Davis’ saga, meanwhile, is also showing it might not wane, either. Davis’ attorney said his client would not do anything that violates her faith. It’s entirely possible the whole event—including Huckabee’s star turn—will repeat itself if the judge orders her back to jail should she refuse to issue same-sex couples marriage licenses. An encore for Huckabee can only help. 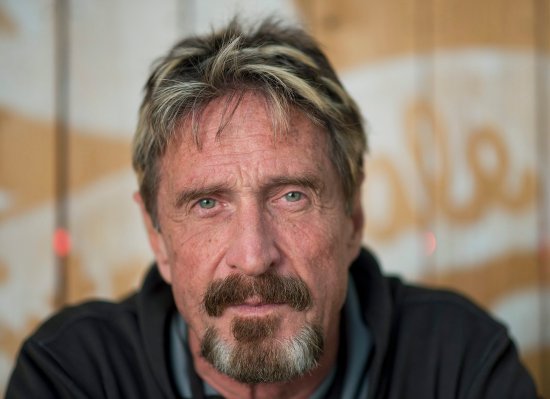 Anti-Virus Software Maker John McAfee Is Running for President
Next Up: Editor's Pick