Ravi and Geeta Patel
Courtesy of Alchemy
By Eliza Berman

“I guess you could say we both started off living the Indian dream and then set out to disappoint our parents,” Ravi Patel jokes. He started off as an investment banker and his sister Geeta was an aspiring diplomat; now they’re both documentary filmmakers. And though the siblings never set out to be a brother-sister directorial duo, they ended up coming together as creative partners to work on a project about two subjects: Ravi’s love life and their parents’ comically deep involvement in it.

What began as a home video of a family vacation is now, six years later, an award-winning documentary they’ve dubbed a “real-life romantic comedy.” Meet the Patels, which debuted at the 2014 Hot Docs festival in Toronto and hits theaters in New York, Chicago and Los Angeles Sept. 11, chronicles Ravi’s response to the “code-red situation,” as his family would describe it, of being almost 30 and still single. As a family trip to India began to feel more like an episode of Intervention: The Single Edition, Ravi began to think that perhaps there was something worth exploring in the arranged marriages that had produced unions like his parents’.

“They started to make a very compelling argument,” Ravi recalls. He thought to himself, “I don’t want to be arrogant. There’s something that clearly works, and I wanted it to work myself.” Having grown up in America, Ravi and Geeta were only familiar with arranged marriage as the standard model of courtship for aunts and uncles and grandparents; it hadn’t been the one they envisioned for themselves. Ravi had seriously dated a white woman for two years, but he concealed the relationship from his parents, ultimately breaking it off thanks largely to the stress of secrecy.

By the time Ravi decided to give the arranged marriage process a try, Geeta had established herself as a filmmaker with a PBS documentary, Project Kashmir. Ravi convinced her to train her new camera on their family as he embarked on his new project, about arranged marriage. “He was like, Geeta, do you realize how crazy our family is? Can you see this from the outside?” Ravi seemed to know, instinctively, that their family’s quirks would make for quality entertainment.

So Ravi, with Geeta and her camera in tow, immersed himself in a new world of courtship, marked by speed-dating conventions in grand hotel ballrooms and pages and pages of “biodata”—essentially one-page dating profiles (education, blood type, skin tone, languages) faxed from one hopeful fixer-upper parent to another. With his parents at the helm, eagerly feeding him pictures of eligible single women like an analog version of Match.com, he traversed the country for dates. Like most dates, some bombed terribly, some saw sparks flying and most fell somewhere in between.

Ravi, whose participation was reluctant if voluntary, gradually warmed to the process as he reflected on the arranged marriages in his community. “These are really inspiring relationships that happened in a way that is antithetical to the way we were raised to view love and marriage—in the sense that love came after marriage—but their commitment and focus on shared goals has kept them together and brought them closer,” he says. Geeta adds that arranged marriage is much more romantic than many outsiders think. “Ravi and I have seen firsthand how it’s romantic, it’s beautiful—it’s sexy even.” Some people, after seeing the film, asked if their mom could set them up. “That’s exactly what we wanted,” she says. “We wanted them to be open to the idea that love and romance can come in different forms.”

Though Ravi is the film’s purported star (with Geeta almost exclusively behind the camera), it’s their parents who end up stealing the show. Throughout the filmmaking process, they didn’t take the project seriously, focusing their energy instead on the outcome of the experiment. “We’ll be like, ‘Hey Dad, I’m working on a documentary, can I film you?’” Geeta says. “And he’ll be like, ‘Yeah, yeah, whatever. Listen, when are you going to get married?’”

Though Meet the Patels tells a story that may be most familiar to first-generation Indians in America, it’ resonated far more widely. “We thought the film was about being Indian,” Geeta explains, but “it’s about family and it’s about love. It’s really that simple.” 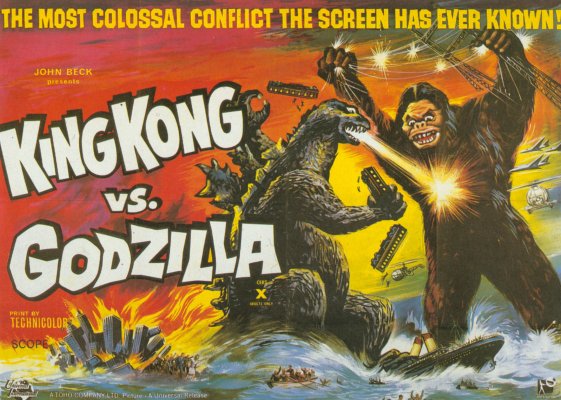 King Kong and Godzilla May Have a Major Big-Screen Showdown
Next Up: Editor's Pick