Laith Majid, the Syrian refugee whose emotional arrival in Greece last month offered a poignant human face to the ongoing migrant crisis, has found refuge in Berlin, according to German media.

As dawn broke on Aug. 16, Majid, his wife and their four children landed on the shores of the Greek island of Kos, six of 12 passengers aboard a deflating plastic raft built for four. They came from Bodrum, a Turkish town that has become a choke point for Middle Eastern and African migrants seeking passage to Europe, and before that from their home in a Syrian town besieged by ISIS.

Daniel Etter, a freelance photojournalist on assignment with the New York Times, was on the Kos beach when Majid’s raft made it ashore. When his family made it onto the beach, Majid broke down, cradling his children in his arms. Etter took a photo.

“In my entire career as a journalist, I have never been so overwhelmed by a moment that I was lucky enough to witness, and lucky enough to photograph,” he wrote last month. “I didn’t know anything about them, yet their reaction said it all.”

On Monday, political group Europe Says OXI wrote on Facebook that Majid and his family had arrived in Berlin, a post accompanied by a photo of the refugees smiling.

The journey from Greece took around three weeks. As the family made their way across Europe, Etter’s photograph of Majid on the beach went viral, with many saying that it humanized a crisis otherwise discussed in rote political terms.

“He’s someone whose humanity at last forces one to briefly admit that many of these migrants are people not so different from ‘us,'” Patrick Kingsley, the Guardian‘s migration correspondent, wrote in August. “And that’s partly what makes his picture so heartbreaking.” 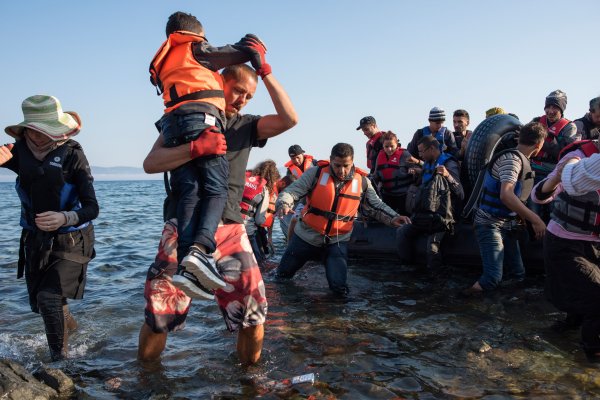 Europe's Summer of Migrants
Next Up: Editor's Pick