Taking in Refugees Is Not a Risk to National Security

A Turkish gendarme carries the body of Alan Kurdi, 3, who drowned along with his brother Galip, 5, and their mother, in a failed attempt to sail to the Greek island of Kos, in the coastal town of Bodrum, Turkey, on Sept. 2, 2015.
Reuters
Ideas
By Anne Speckhard
Anne Speckhard is adjunct associate professor of psychiatry at Georgetown University in the School of Medicine and of security studies in the School of Foreign Service and author of ISIS Defectors.

The image of the body of 3-year-old Aylan Kurdi lying facedown on a Turkish beach has the world reeling in horror. Aylan’s journey ended in death amid a growing crisis in Europe surrounding the plight of refugees pouring in from Syria. Countries across Europe are at long last stepping up to receive desperate refugees. The U.S. should do more to help.

The U.S. has resettled only about 1,500 Syrian refugees since the crisis began in 2011. Congressional opponents opposed to taking in more often cite security concerns. Republican presidential candidate Carly Fiorina said Sunday that the U.S. should be “very careful about who we let enter this country from these war torn regions to ensure that terrorists are not coming here.”

But as a national security expert who has spent more than 20 years working alongside government defense and security experts, I know that the majority of Syrian refugees fleeing war are not using the opportunity of refugee status to embed themselves as terrorists in the West. The majority are trying to escape barrel bombs, chemical attacks, and barbaric violence, caught between the violence of a dictatorial regime and that carried out by terrorists.

They are, for the most part, much less likely to have been involved in terrorism than to have been the victims of it. In fact, refugees who become terrorists are extremely rare. There are only a small number of cases of refugees admitted into the U.S. who have been arrested on terrorism charges—the actual data shows that this is a rare phenomenon.

Refugees from Syria will be carefully vetted, and those with terrorist ties refused. Security concerns should not be a reason to turn away desperate doctors, teachers, nurses, engineers and salt-of-the-earth laborers who simply want to escape a horrific humanitarian crisis alongside their innocent children.

The world is experiencing the largest refugee population since World War II. Yet the portion of the U.S. budget going to help refugees has remained flat-lined. The entire U.S. foreign assistance budget makes up less than 1% of the federal budget and is stretched thin across a range of life-changing programs addressing issues including maternal and child health, water and sanitation development, vaccines, medicines and disease prevention, farming assistance, and children’s education. Only about an estimated 12% of the foreign assistance budget goes to humanitarian support for refugees caught in the crosshairs of war. The U.S. can do better.

After the fall of Saigon, President Gerald Ford set up an interagency task force that in one year resettled 130,000 Vietnamese refugees. In response to news reports that women and children were dying on overcrowded boats, President Carter made refugee resettlement a priority. These weren’t popular decisions, but these presidents showed moral leadership.

There has been a collective failure to halt the war in Syria. Resettlement is not the only solution, but it is a critical way the U.S. can support countries like Lebanon, Turkey, Jordan and our European allies that are hosting millions of Syrian refugees. No parent should be faced with packing their family on a clandestine journey that ends in drowning as Alyan’s did.

Anne Speckhard is adjunct associate professor of psychiatry at Georgetown University in the School of Medicine and of security studies in the School of Foreign Service. She served with her husband, U.S. Ambassador to Greece, Daniel Speckhard from 2007-2010 during which time a large influx of refugees made their way from Turkey to Greece. She is author of Talking to Terrorists, coauthor of Undercover Jihadi, and her newly released book is Bride of ISIS. 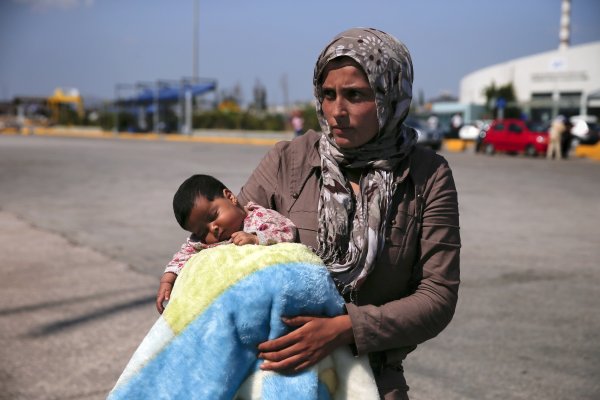 The U.S. Has a Moral Obligation to Help Syrian Refugees
Next Up: Editor's Pick