Police officer Tommi Jones Kelley was pumping gas in Houston recently when she realized someone was standing behind her and turned to see “this teenager I’ve never met before,” she wrote in a Facebook post that has since gone viral.

The teen, identified by Kelley as Mckinley Zoellner, offered to stand behind the officer “to make sure You stay safe!” Kelley wrote in the Sept. 3 post.

After Kelley finished pumping her gas, Kelley noticed Zoellner was still there, standing in the rain. Kelley went over to Zoellner’s mother to thank both of them, and then took a selfie with the teen and posted it to Facebook.

The story has resonated with officers and citizens alike after the “execution-style” murder of Houston sheriff’s deputy Darren Goforth last month at a gas station. Goforth was shot from behind. Kelley referenced Goforth’s death in her post, saying it was encouraging to know there were still “some pretty awesome individuals out there.”

“Yes, I’m the one with the gun on my hip while he stood there empty handed, but he for sure had my ‘6’ while my back was turned,” Kelley wrote. 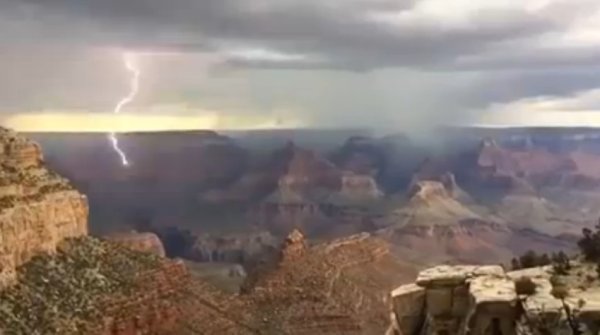 Watch Slow-Motion Video of Lightning Hitting the Grand Canyon
Next Up: Editor's Pick