Why Refugees From Old Wars Are Only Rushing To Europe Now

The gruesome civil war in Syria started several years ago. Iraq and Afghanistan have been roiling ever since the U.S. invasions more than a decade ago. Ethnic strife and political repression have been common in parts of Africa for even longer. But the wave of migrants seeking sanctuary from these places in the European Union has only spiked this summer, with thousands of asylum seekers arriving every day. Why are they coming now?

It depends on whom you ask. The migrants themselves, when they arrive in the E.U. by boat on the shores of Greece or walk across border into Hungary, will often say that their choice to migrate in the last few weeks was personal or coincidental. One Syrian woman, whom TIME met last weekend as she walked through northern Serbia with four of her young children, said her husband was imprisoned by the Syrian regime a year ago, and she only fled when he told her how little hope he has of being freed. A young man from Afghanistan, who came ashore in a packed motorboat on Friday morning on the Greek island of Lesbos, said he left home last week mostly because his parents finally finished the months-long process of scrounging up the money for his journey.

But there are many other factors behind the sudden rush. Perhaps the main draw for migrants fleeing Syria was the German government’s pledge last month to take all Syrian asylum applications, regardless of how they reach German territory. Normally, under E.U. rules on migration, a refugee can only claim asylum in the E.U. country he enters first. That means migrants traveling overland from the Middle East can get stuck in the less prosperous nations of southern and eastern Europe. But in light of the chaos unfolding in Syria, German Chancellor Angela Merkel made a promise to all Syrian refugees: if you manage to physically reach Germany, you can apply for asylum in Germany.

In effect, this amounted to a breach of the E.U.’s migration rules, so Berlin later tried to walk Merkel’s statement back. But many of the three million Syrians who have fled their homeland in the last four years took Germany’s mixed signals as an invitation too tempting to refuse. This year alone, Germany expects to receive more than 800,000 claims for asylum, quadruple the number registered in 2014.

The safest and easiest path for these migrants to reach Western Europe is known as the Balkan route, which takes them more than a thousand miles northwest, by land and sea, through Turkey, Greece, Macedonia, Serbia, Hungary and Austria. Authorities in Hungary, which is governed by a populist right-wing party called Fidesz, have taken the hardest line against migrants crossing their territory. And in July, their promise to seal off their southern border with Serbia spurred tens of thousands of migrants to take the Balkan route before Hungary severs it with a four-meter high fence.

A kind of natural momentum has increased the movement. Migrants reaching Germany are reporting to their friends and relatives back home what pitfalls to avoid, thus removing much of the uncertainty – and therefore the fear – that had been holding people back from attempting the journey. At every stage, the migrants tend to stay in touch via Facebook or text messages with friends who have made it farther along, and that seems to pull the whole chain toward its destination.

Piggybacking on the Syrian rush to Germany are many migrants from countries that are not afflicted with war or persecution, and therefore do not qualify for the benefits and protections of asylum. Hungary estimates that at least a third of the migrants claiming to be Syrian at the E.U. border this year are in fact just economic migrants looking for a better life in Europe. But sorting out which ones get refuge and which get deported will take months if not years for an E.U. migration system that is totally overwhelmed. And in that time, the movement of migrants is expected to continue at about the same pace, at least until the onset of winter makes the journey a lot more difficult and dangerous. 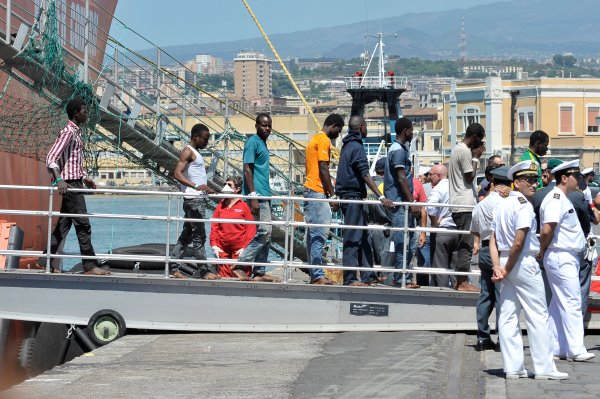