Executives at Chipotle Mexican Grill had a rude awakening on Thursday morning, when a full page ad ran in the New York Post that attacked its food as unhealthy, and called Chipotle’s marketing hypocritical.

According to a report, “The Center for Consumer Freedom’s full-page advertisement in Thursday’s New York Post depicts a smiling, shirtless, overweight young man flexing one arm and resting the other on his ample tummy.”

The text beneath the picture read: “Eat two ‘all natural’ Chipotle burritos a week and you could gain 40 pounds in a year.”

The Center for Consumer Freedom is a lobbying organization that has become famous by fighting campaigns like former New York Mayor Bloomberg’s efforts to ban sales of large, sugary sodas and laws that restrict smoking.

This time, the group is setting its aims against a private company. On it’s website, http://www.chubbychipotle.com, it argues that the company is hypocritical for making claims like its food is GMO and antibiotic-free.

The ad is “a deliberate effort to smear us,” Chipotle spokesman Chris Arnold reportedly said. “These are agenda-driven people who are being backed by unknown parties. It doesn’t matter who they are as long as they pay,” Arnold said. 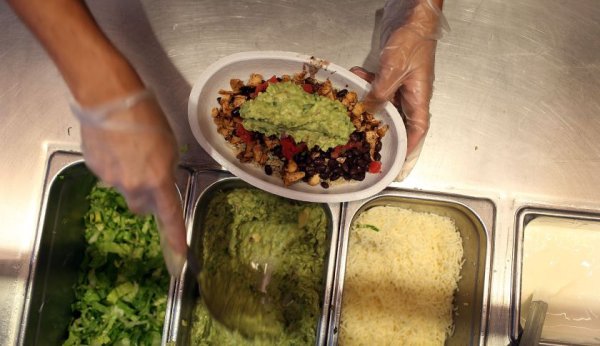 Your Chipotle Burrito Is About to Get More Expensive
Next Up: Editor's Pick