J.K. Rowling has recently been devoting her Twitter feed to the refugee crisis, lending her support to the #refugeeswelcome hashtag that was trending on Thursday. After British newspapers published photographs of Aylan Kurdi, a Syrian toddler who drowned as his family tried to reach Greece, on Thursday, Rowling joined a number of prominent figures urging the British government to change its policy.

More than 2,700 people have died attempting to cross the Mediterranean since January, most fleeing conflict and persecution back home in Syria, Eritrea and Afghanistan. Rowling retweeted a number of posts focusing on the plight of these migrants, including tweets calling the “unwillingness” of British Prime Minister David Cameron to help refugees “truly shameful.”

Her post was retweeted more than 16,000 times, rallying support among her followers. Rowling also retweeted a post calling for people to sign a petition calling on the U.K. Parliament to accept more refugees – a petition that has received three times the required number of signatures (100,000) for it to be considered in Parliament.

In a reversal of earlier policy, Cameron announced Friday that Britain would fulfil its moral responsibility and take thousands more Syrian refugees.

Read next: A Fractured Europe Scrambles to Respond to Spiraling Migrant Crisis 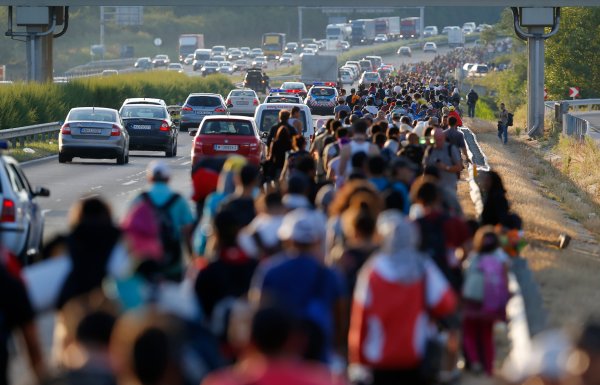 Europe's 'Moment of Truth'
Next Up: Editor's Pick