Actors dressed as Red Army soldiers perform at a gala show to mark the 70th anniversary of the end of World War II in Beijing on Sept. 3, 2015
Kim Kyung Hoon—Reuters
By Nash Jenkins

Thursday’s ceremony in Beijing’s Tiananmen Square commemorating the 70th anniversary of Japan’s surrender in World War II was one of flamboyant pomp and circumstance — a triumphant celebration of the Chinese Communist Party’s ultimate defeat over the Japanese imperialists who ravaged China between 1937 and 1945.

A thousand miles south, however, Taiwanese President Ma Ying-jeou decried the parade as an exercise in historical revisionism. Speaking at a ceremony honoring military personnel in Taipei, Ma urged Beijing to acknowledge the vital role of Nationalist forces — the progenitors of Taiwan’s government — in defeating Japan.

“All major battles on the frontline throughout those eight years were fought by the Nationalist forces under the leadership of late President Chiang Kai-shek,” he said.

He said that communist forces fought in only one of the 22 battles between Chinese and Japanese troops during the eight-year conflict, and that 267 of the 268 Chinese generals killed in the war belonged to the Nationalist camp. 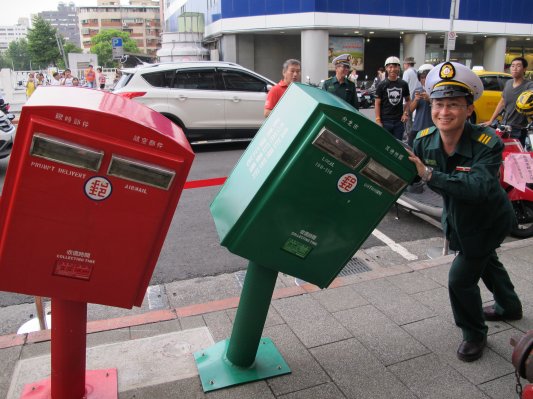 Two Mailboxes Are the Newest Taiwanese Celebrities
Next Up: Editor's Pick