Climate change advocates at a conference in Bonn, Germany this week lamented the slow pace of crucial negotiations on how to curb global warming—but several leaders said they remained optimistic that a final deal is within reach.

As the conference ended on Friday, negotiators had yet to agree on a slew of key details on how to address climate change, which means there is still much work to do less than three months before a landmark conference in Paris aimed at developing a binding global agreement to cut greenhouse gas emissions. Many key pieces of a potential deal remain undecided, from how to fund climate change initiatives in developing countries to how to ensure transparency.

“We are aware that progress has been insufficient and uneven,” said Jorge Voto Bernales, special representative of Peru for climate change, at the conclusion of this week’s session. “Three months before Paris, the pace is slow and the current tool is evidently not the best suitable for effective deliberations.”

Nonetheless, experts said the pace of negotiations won’t necessarily preclude a deal. In complicated negotiations, the most important decisions are often left to the end. In the case of an international climate change agreement, months remain before a final decision is expected. Alden Meyer, director of strategy and policy at the Union of Concerned Scientists, said he remained optimistic about the chance of a deal and the pace was part of the “certain rhythm” of most negotiations.

In a press conference following the negotiations, U.N. climate chief Christiana Figueres argued that slow pace was “not important” to broader success. “Of course we’re all impatient. Of course we’re all frustrated,” she said. “While the frustration and impatience is absolutely a reality, this does take the time that it takes… It is ultimately the outcome that is the important thing.”

The meeting, which drew negotiators from nearly 200 countries, will be followed by a series of informal discussions between key parties, including a closed-door session between U.N. Secretary General Ban Ki-Moon and around 40 heads of government in September. Stakes for concrete progress will be higher at the next formal negotiating session, which will be held in October, observers said.

“The pace does need to pick up,” said Meyer. “But it’s much too early to panic.”

David Waskow, director of the World Resources Institute’s International Climate Initiative, described the process as a funnel. “Over the course of the two weeks, issues will get whittled down to core political questions,” he said.

Rather than relying on a top-down mandate for emissions cuts, the upcoming U.N. conference calls for countries to outline their own commitments, called Intended Nationally Determined Contributions (INDCs), and agree to follow them in the following years and decades. The U.S., one of nearly 60 countries that have submitted an INDC, committed to cutting carbon emissions by 26% to 28% by 2025 from 2005 levels. China, where carbon emissions have grown rapidly along with the country’s economy, has committed to having its carbon emissions peak around 2030.

The commitments have been substantial, but many key countries like India, the world’s third-largest emitter, and Saudi Arabia, home to one of the world’s largest oil supplies, have yet to submit their plans. Perhaps more significantly, recent research has shown that current commitments fall significantly short of what would be needed to limit global warming to 2°C (3.6°F) by 2100, the level deemed acceptable without catastrophic results for the Earth and its inhabitants.

This realization has drawn attention to an element of a climate change deal that would require countries to reassess their commitments every five or 10 years. Many climate advocates say rethinking commitments at five-year intervals will allow the flexibility to meet the 2°C goal, but representatives of developing economies like China and India remain concerned about the implications, Meyer said.

A contentious but key part of any deal will be to find a way to help developing countries finance efforts to reduce greenhouse emissions. Negotiators avoided largely avoided the issue this week, said Meyer. The topic will be on the agenda of a number of economic meetings in the coming weeks.

Despite the slow pace of this week’s negotiations and apparent setbacks, there seems to be little disagreement on the need for a comprehensive deal.

“Every single country is fully committed,” said Figueres. “The proof is in the pudding. And the pudding is going to come out of the oven in Paris.” 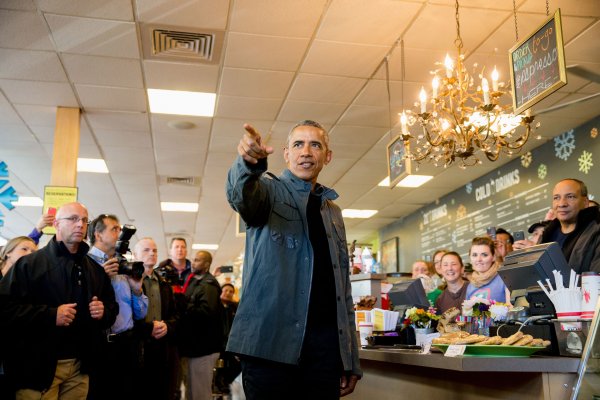 Obama Takes Climate-Change Fight to 'Frontlines' With Alaska Trip
Next Up: Editor's Pick