On Wednesday, the line of lunchers waiting in San Francisco to eat at what some customers excitedly, half-jokingly called the “robot restaurant” stretched out of sight. But a sign about 75 people deep from Eatsa’s door promised a mere eight minute wait time.

“We are producing food for customers at an incredible rate,” says co-founder Tim Young, who watched people departing gleefully with bowls full of quinoa. “And we’re creating a new kind of fast food experience. What we’ve designed creates a sense of mystery, creates a sense of intrigue.”

There are no cashiers, waiters or busboys at Eatsa, a new, fast-casual restaurant in the city’s Financial District. But while this largely human-less eatery—where patrons order on iPads and are then summoned to cubbies that open to reveal their food—is definitely intriguing, it’s not an entirely new concept. What Young and his founding team have built is a 21st century version of automats, 20th-century cafeterias where people would survey dishes placed in windowed apartments and pop in a nickel to serve themselves a helping of pie or macaroni and cheese.

The experience is not only sleeker a century after automats started catching on, but also individualized, cashless and meat-less. Customers swipe their credit cards at one of nine iPad kiosks to start customizing a bowl full of quinoa, a protein-rich grain that comes in yuppie-worthy varieties like lemon-toasted herb. Patrons can add options like chimichurri sauce, orange miso sauce, grilled corn, pickled onions, roasted beets or parsnip strips, among heaps of other ingredients. In short, there’s absolutely no pre-made macaroni, though it’s still plenty cheap (starting at around $7 a bowl).

Behind Eatsa’s wall full of windowed apartments—which are transparent touchscreens that direct people to “tap twice” for their food—are about seven people making up the bowls during the lunch rush. The patrons can’t see them, but like the crowd, the people behind those screens are also being directed by software. “Every person that has a role has an iPad that manages their job,” Young says. This, he says, is what allows the workers to keep up with orders that no team of mere humans ever could.

“Quite frankly people can’t manage that kind of queue,” he says of the hundreds of orders that will soon be streaming in via kiosks and people’s mobile phones. “They can’t understand that they have this kind of volume, here’s what the timing will look like.”

Eatsa is marvelously at home in the Bay Area, a place obsessed and enthralled by technology that generally involves staring at a screen rather into another human’s eyes, full of people proudly pursuing efficiency by excusing inefficient humans from the process. The people in line were not misanthropes (though some people may love Eatsa for that) but rather early adopters hungry to test out anything they can get their hands or forks on.

“It’s not that I’m against humans serving food and it’s not that I’m against machines serving food,” says Deepali Agarwal, who works for social network company Skout. “It’s a new concept and being in tech, I’m just interested in how it works.” Agarwal and her colleague, Nikki Castellanos, said with shrugs of obviousness that automation is where society is headed. But Castellanos also pointed out that they were there together. “Pretty much everyone here is with someone else,” she says. “It’s a point of conversation with another human being also.”

For now, there is a human “concierge” roaming around to help any patrons who have questions about how things work, but Young says that they are open to getting rid of all the heat signatures in the future. “In most restaurants you don’t see the kitchen,” he says. “The core functions can be solved by the customers themselves.” 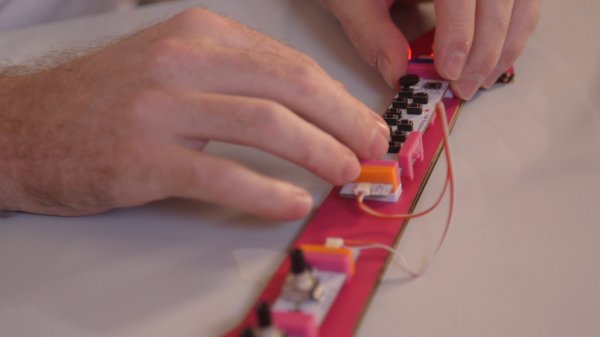 LittleBits Are Like Electronic Legos For Kids and Adults
Next Up: Editor's Pick