This Is How Star Wars' BB-8 Droid Actually Works

A pair of resourceful Star Wars fanatics have put forth a convincing theory on the inner workings of BB-8, the adorable droid set to make its film debut in The Force Awakens this holiday season.

The new droid, which will also be available as a $150 toy for franchise fans, has a head that can remain mostly stationary even as its spherical body is rolling madly to move it from place to place. The effect almost makes it look as if BB-8’s head can defy gravity.

Not so, say the pair of Spanish designers who started a website explaining how the machine works. The fans dug up a patent filed by Disney’s Imagineering group back in 2010 which appears to explain how the BB-8 functions. The patent describes a robot that uses omni wheels to allow its spherical body to roll in any direction, with each wheel being connected to a motor. Gyroscopes and acceleromoeters are used to determine the machine’s postioning. A base plate serves as a counterweight, helping the robot maintain a low center of gravity.

A mast running vertically through the sphere is the key to BB-8’s “floating head” appearance. The fan mockup of BB-8’s internals show the most connecting to the head via a rotation motor that lets the head spin independently of the robot’s spherical body. A flexible joint lower down on the mast allows for additional maneuverability. A separate mockup with less basis in Disney’s patent uses a stool design as the head’s base instead of mast. A magnetic rail shaped like a semicircle sits atop the stool, allowing the head to roll forward and backward separately from the body’s movements.

Eventually, the secrets of the BB-8 will be revealed—at least of its toy version. Fans will be able to buy the gadget and break it down into parts starting Friday. 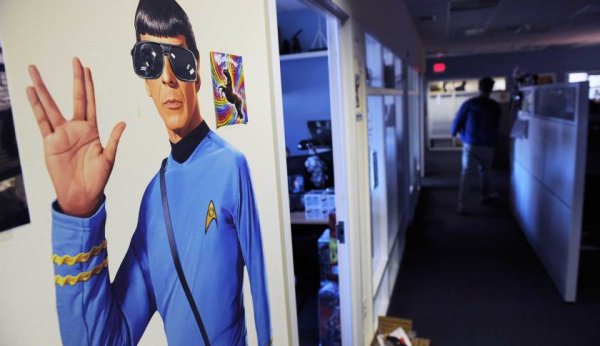 Here’s Where Thinkgeek Is Opening Its First Physical Store
Next Up: Editor's Pick