Trump and Republican National Committee Chairman Reince Priebus met Thursday afternoon at Trump Tower in Midtown Manhattan and agreed that the GOP needs to rally behind its eventual nominee — even if it isn’t Trump, who is leading in the polls. Some Republicans feared that a third-party run from Trump would cut into the GOP nominee’s support and help Democrats coast to the White House.

“I will be totally pledging my allegiance to the Republican Party and the conservative principles for which it stands,” Trump told reporters. “We will go out and we will fight hard and we will win, we will win.” Priebus did not join him in Trump’s lobby.

Trump had long resisted making such declarations. During the first Republican debate, he said he would not limit himself politically and said he might do an independent campaign. “I’m, you know, talking about a lot of leverage,” he said at the Cleveland debate. “We want to win, and we will win. But I want to win as the Republican. I want to run as the Republican nominee.”

But Trump advisers have urged him to be more pragmatic. It’s difficult to get on presidential ballots as a third-party candidate, and in some places it is almost impossible. The costs alone are prohibitive to most candidates who are not sitting on Trump’s billions, but cash alone cannot overcome the institutional hurdles that reward a two-party system. Some state parties have moved to add loyalty to the party as a requirement to get on the primary ballots, too.

Trump’s signature also gives the Republican National Committee reason to breath a sigh of relief. RNC officials fretted that a third-party Trump bid would fracture the conservative base. “The best way for the Republicans to win is if I win the nomination and go directly against whoever they happen to put up. For that reason, I have signed the pledge,” he said to cheers.

Trump’s move is likely to quiet criticism he has faced from rivals. Trump, they said, is not a real Republican and cannot be trusted to represent conservatives. Rival Jeb Bush this week has repeatedly criticized Trump for his previous support for abortion rights and for Democratic front-runner Hillary Clinton. Trump’s pledge of loyalty to the GOP undercuts some of Bush’s attack. “That issue, to the extent that it exists, has been taken off the table,” former Trump adviser Roger Stone told MSNBC. 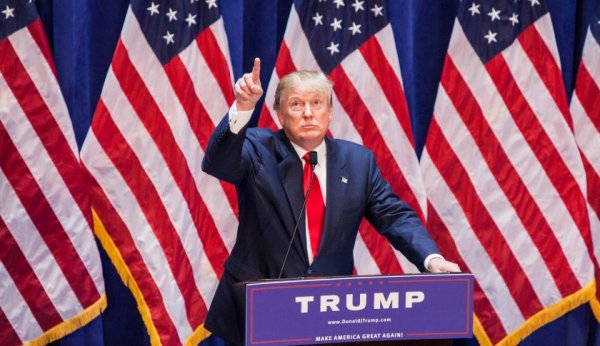 Trump Says He Will Change Denali’s Name Back to Mt. McKinley
Next Up: Editor's Pick