The World's Next Superpower Announces Itself With an Epic Parade

There are few places in the world better suited for spectacle than the vast expanse of Beijing’s Tiananmen Square. On Sept. 3, in a grand military parade marking the 70th anniversary of Japan’s official surrender in World War II, 11 phalanxes of People’s Liberation Army (PLA) soldiers strutted through the heart of China, taking what viewers had been told would be exactly 128 steps, each stride a perfect 75 cm.

Separately, guards of the national flag measured out 121 paces, each foot forward representing the number of years since 1894, when imperial Japan began to carve up Chinese territory until its defeat in 1945. Above, air-guard formations rendered a perfect 70 in the sky, marking the seven decades since Japan’s official surrender in World War II. Fifty-six cannons were rolled out, one for each of China’s official ethnic groups. The PLA band and chorus provided the syncopation, a drumbeat of 112 measures per minute. Training for the martial pageantry had been carried out with such dedication that, in the run-up to the parade, the 50 generals who were leading the foot formations lost an average of 11 lb., according to Chinese state media.

It was, for the casual observer sitting in Tiananmen Square on Thursday morning, under a flawlessly blue sky, difficult to judge the split-second accuracy of all the goose-stepping in China’s largest military parade in nearly half a century. Did each soldier’s stride measure exactly 75 cm? Were the tubas tooting in proper time? But the overall effect of 12,000 synchronized troops, 500 pieces of military equipment, some 200 aircraft overhead — not to mention nearly 1,000 foreign representatives from 17 countries who had joined the martial pageantry — was undeniable: once devastated by more than a century of foreign occupation and humiliation, most recently by the Japanese during World War II, China had transformed into a world-class economic, military and marching power.

No longer were China’s soldiers outfitted in the ragged clothes of the communist guerrillas, or, more likely, that of their rival Nationalists who did the bulk of the fighting against the Japanese. (The Kuomintang, or Nationalists, retreated to Taiwan in 1949 after losing the civil war to Chairman Mao Zedong’s communist forces.) The soldiers were not only sharply uniformed but arranged so that they all appeared the same height. New fighter jets soared ahead, streaming pastel-hued contrails, and the latest in ballistic-missile technology rolled past. Chinese state media said that 84% of the military hardware on display had been unveiled for the parade. “You can never exaggerate the power of a strong military,” Chinese military analyst Gao Feng tells TIME. “We Chinese have learned that we must have a strong army to protect our sovereignty and territorial integrity.”

Presiding over the martial liturgy was Xi Jinping, general secretary of the Chinese Communist Party, chairman of the Central Military Commission and President of China — his titles in descending order of importance. Since taking power in Nov. 2012, Xi , whose father was a communist revolutionary hero (against the Chinese Nationalists, not the Japanese), has consolidated power rapidly. Perhaps in a sign of his authority, the Sept. 3 military display broke tradition as the first major procession not to take place on Oct. 1, the anniversary of the founding of the People’s Republic in 1949. This was Xi’s parade.

In his opening speech, Xi vowed to trim the PLA by 300,000 forces in order to make it a meaner, leaner fighting force. (China is embroiled in territorial disputes with various neighbors, particularly in the South China Sea.) Some of the rest of his words were a pastiche of the various slogans and catchphrases of previous generations of Communist leaders. The homage was personally directed: gathered on the Tiananmen rostrum above Chairman Mao’s portrait were not only the current members of China’s seven-man standing committee, which steers the nation, but also Xi’s predecessors Hu Jintao and Jiang Zemin, along with former Premiers Wen Jiabao, Zhu Rongji and Li Peng. The appearance of Jiang provoked a gasp from the audience at Tiananmen, not only because he was well enough to attend the parade at 89 years old but also because Xi’s massive anticorruption campaign has netted many of Jiang’s acolytes.

Also surveying the troops, tanks and aircraft were 30 world leaders — most from authoritarian nations or states with strong economic and ideological ties to China. Russia’s Vladimir Putin, whose country suffered as terribly during World War II as China did, was the most prominent head of state to accept Xi’s invitation. As the only other leader from one of the wartime Allied Powers to join the festivities, Putin was honored with the anchor position in a meet-and-greet with Xi. Most Western nations declined to send top-ranked representatives. But the gathered crowds cheered for South Korean President Park Geun-hye, who has brought her country closer to China. U.N. Secretary-General Ban Ki-moon and Egypt’s Abdul Fattah al-Sisi also attended, along with political sympathizers like Venezuela’s Nicolás Maduro, who secured lucrative oil loans with Beijing in the run-up to the parade.

Perhaps the most notorious VIP was alleged war criminal Omar Hassan al-Bashir, the Sudanese President who is wanted by the International Criminal Court on charges of masterminding genocide. During their meeting in Beijing before the parade, Xi greeting al-Bashir as “an old friend,” and China has supplied weapons to Sudan. The U.S., by contrast, sent its ambassador to China, Max Baucus.

Chinese state media stressed that the Sept. 3 event — initiated this year as a public holiday called the Commemoration of the 70th Anniversary of Victory of Chinese People’s Resistance Against Japanese Aggression and World Anti-Fascist War — would help the world “pursue peace.” In his speech, Xi proclaimed that “we Chinese love peace,” before heading off in a sun-roofed car to inspect the troops. Soon came the procession of tanks, their low rumble echoing a time 26 years ago when a lone protester stood up against a column of tanks before disappearing from history. Then the audience was treated to a march of missiles, including the much hyped Dongfeng (East Wind) 21-D, a never-before-seen hypersonic ballistic weapon that could target aircraft carriers and potentially force the U.S. Navy to rethink its reliance on such large ships.

In the viewing stands at Tiananmen, elderly gentlemen with chests full of medals mixed with young ethnic minorities wearing the distinctive costumes and hats that they are encouraged to wear during official events. Occasional children wandered by, including an 8-year-old girl named Mandy Li. “Today is a day to remember how much we hate the Japanese,” she said, as she walked along Tiananmen Square’s western perimeter. “Now we will show the world how strong China is.” Chinese textbooks emphasize the atrocities committed by Japanese during World War II, and in recent days the airwaves and newspapers have been jammed with tales of imperial Japan’s brutality. Japanese invaders killed 2.2 million Chinese soldiers, readers of state media were reminded, and imperial Japanese soldiers even raped and killed new mothers. China estimates that 35 million citizens died or were injured during the war.

After the display of military might, the Beijing parade shifted gear to the kind of paean to peace that is more common in some other countries’ war remembrances. Exactly 70,000 doves were released in the air, in honor of pacific sentiment, followed by a confetti of multicolored balloons. If the focus on the parade had been more doves and less goose-stepping, then perhaps more nations would have joined in. But as much as Xi may want to play to an international audience, the Sept. 3 show was primarily for the Chinese people. At a time of economic slowdown in China, patriotism may help the Chinese leader unite the masses. “So cool,” gasped a Beijing academic in the viewing stand as the so-called “carrier killer” Dongfeng 21-D missile rolled past. “Nobody can boss us around now.” 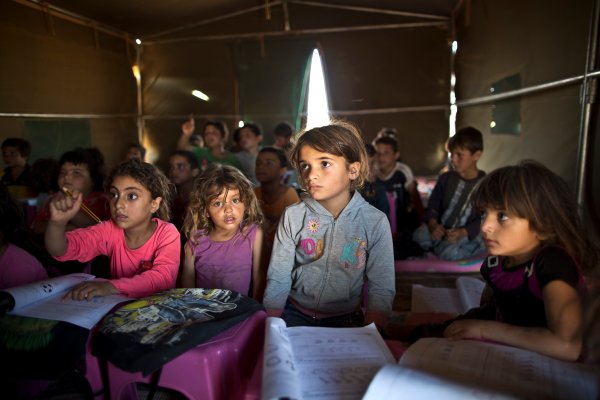