President Barack Obama speaks during a visit to the Snow City Cafe in Anchorage on Sept. 1, 2015.
Andrew Harnik—AP
By Justin Worland

President Barack Obama brought his crusade against climate change to Alaska this week with a three-day trip designed to highlight the devastating effects of global warming and promote initiatives to address the issue.

“Human activity is disrupting the climate, in many ways faster than we previously thought,” Obama told a meeting of international delegates in Anchorage Monday. “Climate change is no longer some far-off problem. It is happening here. It is happening now.”

The visit to Alaska, a state that is both rich in fossil fuels and particularly vulnerable to climate change, places Obama at the heart of the struggle to adapt. Rising sea levels, devastating wildfires and coastal erosion all threaten communities across the state, thanks largely climate change. But, at the same time, Alaska benefits from the very fossil fuels that help cause man-made global warming. Oil resources support thousands of jobs in the state and allow the state to avoid levying income or sales tax. Every year the state government issues a royalty check to state residents (nearly $1,900 in 2014) funded by the oil industry.

While Obama has billed his trip as an opportunity to highlight the threat of climate change—and the steps his Administration is taking to fight it—his policies embody the tension between the vital fossil fuels play in the U.S. economy and the need to reduce carbon emissions. Obama has proposed aggressive U.S. action on climate change, including a 26% to 28% reduction in carbon emissions by 2025 from 2005 levels. But he has also supported measures to open oil drilling in the Arctic, a move condemned by environmentalists angered over the danger of an disastrous oil spill and the threat of more carbon emissions

“Obama’s visit to Alaska is really significant, not just because he’s the first sitting president to visit this state, but because Alaska is really at the front lines of climate change in the U.S. right now,” said Marissa Knodel, a climate change campaigner at Friends of the Earth. “But, while he’s claiming he wants to be a climate leader, he’s doing the exact opposite by opening offshore oil and gas to companies like Shell for drilling.”

Obama, whose arrival in Anchorage on Monday was met with protest from opponents of drilling, has said that allowing limited drilling will allow the U.S. to remain energy independent while it pursues alternatives to fossil fuels. “Now even as we accelerate [the clean energy] transition, our economy still has to rely on oil and gas,” Obama said in his weekly radio address days before traveling to Alaska. “As long as that’s the case, I believe we should rely more on domestic production than on foreign imports.”

Citing academic research, climate change advocates argue that burning all the fossil fuels buried in the Arctic would contribute to global warming to an unsafe degree. The region contains nearly a quarter of the world’s undiscovered oil and gas resources, according to the U.S. Energy Information Administration. And a 2014 study published in the journal Nature concluded that “development of resources in the Arctic and any increase in unconventional oil production are incommensurate with efforts to limit average global warming” to a level deemed acceptable by the Intergovernmental Panel on Climate Change.

Not that you’d know the President supported Arctic drilling from his Alaska visit. In appearance after appearance, the President highlighted the ways in which climate change has threatened the region. There may not have been a better place for such a pitch. The state has warmed by 3.4°F (1.9°C) over the past 50 years, twice as fast as the country at large over, according to the Environmental Protection Agency (EPA). This past winter was especially warm in Alaska, with temperatures 4 to 10°F (2 to 5.6°C) warmer than normal, according to the National Oceanic and Atmospheric Administration (NOAA). Experts expect temperatures to rise as much as 7.0°F (3.9°C) by 2100.

Temperature increases have contributed to melting ice and glaciers in the region. In total, 75 billion tons of ice from glaciers melts in the state each year, according to a recent study in Geophysical Research Letters. The melting of glaciers contributes to global sea level rise, in addition to destroying a local treasure and tourist draw. In the Alaskan Arctic, melting ice has threatened the habitats of many native animals, including the polar bear. Just last week thousands of Arctic walruses flocked to an Alaskan shore, likely because they couldn’t find ice haul out. Ice loss, sea level rise and warmer waters have also contributed to the erosion of the state’s coast at an average rate of 4.6 feet (1.4 meters) each year. Entire communities may need to be relocated just to survive.

At the same time the gradual loss of Arctic sea ice has opened new shipping possibilities in the far North—which in turn has contributed to a battle of influence in the Arctic between the U.S. and Russia, one Washington is seen at risk of losing. During his trip, Obama announced a number of measures aimed at quelling those concerns, including an expanded U.S. naval presence in the region.

The trip to Alaska is the latest in a series of effort by the President to draw attention to global climate change and position the U.S. as a leader on the issue. The White House recently finalized the Clean Power Plan, which mandates emission reductions from power plants, and announced initiatives to expand solar power and billions of dollars in private sector commitments to finance renewable energy production. Climate change was also in the background of Obama’s visit to New Orleans last week for the tenth anniversary of Hurricane Katrina.

The White House hopes that recent climate actions will give the U.S. a leadership position at a United Nations conference on climate change in Paris later this year. Climate advocates and global leaders alike hope that summit will yield the world’s first binding and global agreement to address global warming that will require concrete cuts to curb carbon emissions.

“This year, in Paris, has to be the year that the world finally reaches an agreement to protect the one planet that we’ve got while we still can,” said Obama in a speech on Monday. “We can have a legitimate debate about how we are going to address this problem; we cannot deny the science.” 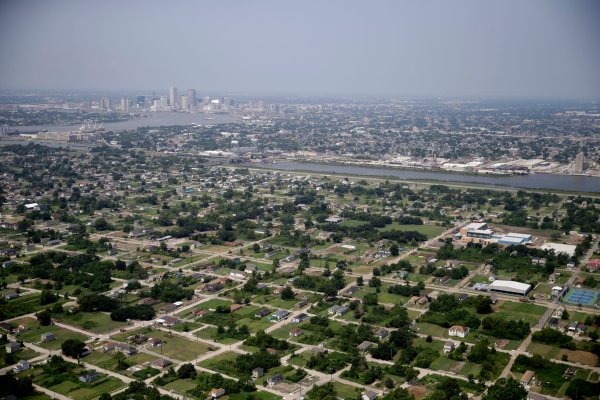 How Katrina Prompted Green Building in New Orleans
Next Up: Editor's Pick