Bashar Masri, main investor of the new Palestinian city of Rawabi, in front of an apartment building under construction in Rawabi, West Bank, on Feb. 24, 2014.
Oliver Weiken—EPA/Corbis
By Inna Lazareva / Rawabi, West Bank

Bashar Masri, 54, looks pensive as he sits in the gleaming, glass-walled luxury apartment showroom of Rawabi, a brand new Palestinian city he has built from scratch.

Rawabi is the first planned town to be built in the West Bank. The futuristic, hi-tech and eco-friendly town, which welcomes its first residents this month and eventually aims to house up to 40,000 people cost $1.2 billion, provided by the Qatari Diar real estate firm and Masri’s own Massar International real estate firm.

Masri is today one of the richest men in Palestine, an accomplished real estate magnate and entrepreneur who frequently meets international leaders, from the United Nations Secretary General Ban Ki-moon to the U.S. Secretary of State John Kerry.

But his wealth and polished appearance betrays little of his past as an angry youth growing up in the West Bank city of Nablus and his stints in Israeli prisons. He was born in 1961 and Israel invaded the West Bank and ended Jordanian control in 1967. As he grew up, Masri found himself in confrontation with Israeli soldiers who patrolled his home town and enforced Israeli rule.

“As a kid, I believed in violence”, Masri says. “I was active in my high school, planning demonstrations and writing letters to the U.N. Secretary General Kurt Waldheim at the time, protesting the occupation and voicing the fact that we are Palestinians and nothing else but Palestinians. At that time, we weren’t even recognised as Palestinians….. Saying that you are a Palestinian under occupation was enough to send you to prison; carrying a Palestinian flag was enough to be shot dead on the spot and so we were revolting against that. So that was my activism.”

Masri was arrested for throwing rocks and spent a few nights in a cell in 1975 when he was 14 years old. By the time he was 16, another stint behind bars meant he missed his exams. After his release, his father sent his son to finish high school in Cairo, Egypt.

He went on to study chemical engineering and management in American and British universities. But when the first intifada broke out in 1987, he returned home. Masri says this time he did not throw any stones. “At that stage, I wasn’t going out in demonstrations. I was more on the planning side,” he says.

Masri continued to work abroad and return home periodically until 1991 when he arrived at Israel’s Ben Gurion airport and was deported. “I was handed a paper from the Israeli Minister of the Interior, saying that I am a security risk to the state of Israel. If there was a Bin Laden then, I would have thought I was Bin Laden,” he says. He was allowed back in 1994.

After finishing his studies, Masri made his fortune working in real estate deals in Morocco, Libya, Jordan and Egypt, and also worked as a management consultant in London, Saudi Arabia and Washington DC.

The time away from home gave Masri a chance to reflect on what was happening in the West Bank. He thought about his previous visits home, meeting his former classmates who had been high achievers at school. But in the years following graduation, there were few jobs. “They were in a pathetic situation – no jobs, nothing to do,” he says.

Encouraged by the 1994 Oslo Accords, and eager to come back, Masri said he became determined “to help build a nation and give opportunities to my people.” The way to do so, he decided, would be to build Rawabi, a new town, which would provide cheaper accommodation than nearby Ramallah and employment for local people.

At first, the project was halted due to the outbreak of the second intifada in 2000, but in 2011, ground was broken and construction began. Today, the city is one of the largest job providers in the West Bank, employing approximately 10,000 people. Of its engineers and architects, one-third are women.

Yet the price for building Rawabi meant co-operation with Masri’s erstwhile enemy — Israel, which continues to occupy the West Bank.

In the course of building the city, Masri shook hands with numerous Israeli army generals, politicians and businessmen in order to facilitate the construction of the city, build access roads and deliver building supplies. He has faced criticism from some Palestinians who criticise him for ‘normalising’ the occupation. “All Palestinian factions and nongovernmental institutions, as well as all the Palestinian people, have made a decision to boycott the occupation forces, which is something that should apply to everyone, including Rawabi, ” Wasel Abu Yousef, a senior official of the Palestine Liberation Organisation told the al-Monitor website.

But despite the succes of Rawabi, which could not be built without Israeli support and goods, Masri is not optimistic about the current political situation. “You need two to tango and I don’t think we have two that can tango right now,” he says.

But as tensions between Israelis and Palestinians endures, Masri says affordable, good quality housing and jobs could help provide an alternative to violence. “Nobody who wants to hurt someone else would buy an apartment and would come to live in a city like this,” he says. 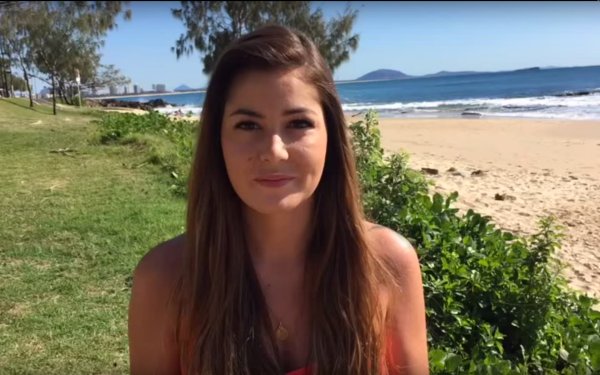 Viral Video of Pregnant Tourist Was a Marketing Stunt
Next Up: Editor's Pick