Hillary Clinton on Monday endorsed a lobbying regulation proposal beloved by the Democratic left, marking a significant win for progressive groups as they seek to shape the Democratic presidential primary.

Introduced by Wisconsin Sen. Tammy Baldwin, the bill is aimed at slowing the so-called revolving door between Wall Street and government regulatory positions and controlling the influence of lobbyists on Capitol Hill.

In an op-ed in the Huffington Post, Clinton and Baldwin acknowledged that “Americans’ trust in government is eroding.”

“The American people need to be able to trust that every single person in Washington—from the President of the United States all the way down to agency employees—is putting the interests of the people first,” they wrote.

Her endorsement of the Baldwin bill comes just six weeks after Sen. Elizabeth Warren called for all the presidential candidates to endorse it. Warren’s move was widely seen as specifically targeting Clinton.

Clinton’s main Democratic competitors have endorsed the bill as well. Vermont Sen. Bernie Sanders has long supported limiting the influence of lobbyists in Washington, and former Maryland Gov. Martin O’Malley has set specific anti-lobbying measures, some of which go even further than Baldwin calls for.

It also lengthens the period in which government employees and members of Congress can lobby the government after quitting their posts from one to two years. Under the bill, federal examiners would be prohibited from accepting employment with financial institutions they oversaw for two years.

The bill also requires financial regulators to recuse themselves from actions that would benefit former employers for two years, instead of one.

Finally, it tightens the legal definition of lobbying, clamping down on former government officials who exploit loopholes in lobbying rules.

Last week, progressive groups called on Clinton to ban golden parachutes and endorse Baldwin’s bill. Democracy for America was quick to claim credit along with other progressive that have put pressure on Clinton recently, with a spokesman calling it a “pretty clear response to the letter.”

“Secretary Clinton deserves real praise for listening to Elizabeth Warren wing Democrats and taking this vitally important first step in slowing down the revolving door between Wall Street and Washington,” Charles Chamberlain, executive director of DFA said in a statement.

Baldwin is campaigning for Clinton in Iowa on Monday. 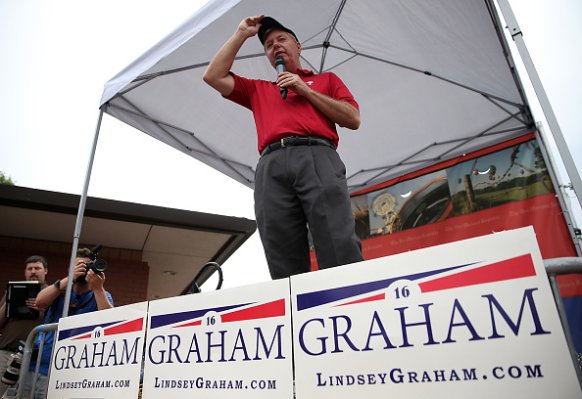