Thai Royal Police officials remove evidence from the site where a suspect of the recent Erawan Shrine blast was arrested in Bangkok on Aug. 29, 2015
Chaiwat Subprasom—Reuters
By Charlie Campbell

The recent bombing of Bangkok’s Erawan Shrine was likely intended to be the first of a spate of similar terrorist attacks, say Thai police, who are now seeking a Thai woman thought to be connected to a foreign suspect arrested over the weekend.

According to the English-language website of popular Thai newspaper Khaosod, the woman has been identified as Wanna Suansan, 26.

At least 20 people died and more than 120 were injured on Aug. 17 when an explosion ripped through the popular Hindu shrine that is a huge draw for Asian tourists visiting the Thai capital, especially ethnic Chinese. Half the dead were foreigners.

On Sunday, authorities found what appeared to be bombmaking equipment — including urea-based fertilizer (which can be mixed with nitric acid to make a potent explosive), digital clocks and flash powder — at an apartment in east Bangkok after a raid in a neighboring district on Saturday turned up a haul of similar paraphernalia. A foreign man of unknown nationality was arrested during the earlier raid and remains in custody.

“There were large quantities of bombmaking materials including 10 detonator cords” seized on the first raid, said assistant police chief Prawut Thavornsiri, according to the Bangkok Post.

The detained suspect was apparently in possession of a fake Turkish passport, though investigators are not sure as to his true nationality, and the Turkish embassy has denied he is a citizen.

“He gave a certain amount of cooperation, saying where he traveled from,” explained Prawut. “But we don’t believe everything he said. So far he has made no confession.”

Nobody has claimed responsibility for the Erawan Shrine blast. The key evidence remains CCTV footage of a slender man with yellow T-shirt, dark-rimmed glasses and shaggy hair who is seen dropping a bag at the shrine minutes before the explosion and hastily departing. Police do not believe the suspect in detention is the same man.

Besides a drastic and bloody escalation of long-standing political tensions between Red Shirts and Yellow Shirts, or a bid by southern Thailand’s Malay-Muslim militants to bring their insurgency to the capital, it is being suggested that a group sympathetic to the Muslim Uighurs of far northwestern China may be responsible.

Many Uighurs complain of marginalization and repression in their homeland at the hands of Beijing. A total of 109 Uighurs were forcibly repatriated from Thailand to China last month — and were seen arriving in shackles and hoods. Many Turks feel a common bond with the Turkic-speaking Uighurs and their treatment at the hands of the Thais prompted furious protests in Istanbul, including an attack on the Thai consulate there.

Anthony Davis, a Southeast Asia specialist at security analysts IHS-Jane’s, told a meeting at the Foreign Correspondents’ Club of Thailand last week that ultra-nationalist Grey Wolves from Turkey were likely responsible for the Erawan Shrine bombing.

“We’re probably looking at a hybrid involving an ideologically or politically driven element based abroad — maybe Turkish nationals, Uighur exiles or Uighur exiles with Turkish nationality — and a Bangkok-based criminal component acting as facilitator,” he tells TIME. “What they have in common is the same ethnicity and the same shared hatreds.”

Davis says the “traditional cozy accommodations” between some corrupt Thai officials and transnational gangs operating in Thailand — often regarded as just “common criminals” — may now come under scrutiny. “These mutually profitable arrangements may now be seen as representing a direct threat to national security,” he says. 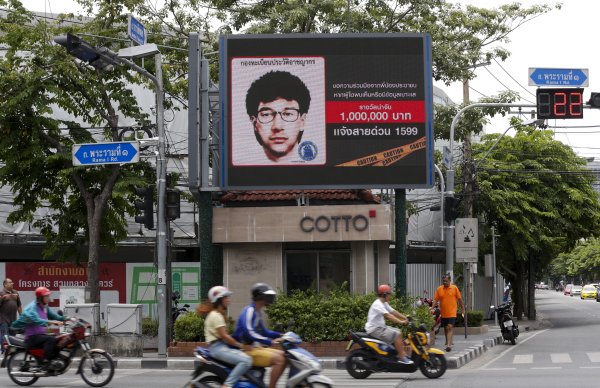