Miley Cyrus' Surprise Album Is Bigger Than the VMAs

It’s been almost two years since Beyoncé purportedly changed the music industry with her surprise drop of her self-titled album in December of 2013—and it seemed, until now, that she hadn’t, really. In the months following the release of Beyoncé, artists of a similar caliber were treated as time bombs. Surely, soon, one of them would follow suit and surprise us all with a new album. But none of them ever did. Until tonight, when Miley Cyrus announced her new album, apparently titled Miley Cyrus and Her Dead Petz, such hopes went unanswered.

Cyrus plays on the same field as fellow singers including Lady Gaga, Katy Perry, and Taylor Swift, but all of her contemporaries have remained bound by a rigid schedule dictated by record companies or by their own reliance on old-school promotional cycles. Her drop of a new album isn’t imaginative, strictly speaking—after all, Beyoncé did it first—but her hijacking an awards show to promote suddenly-released material feels new. All artists at the VMAs want to get someone to buy their music, but only Cyrus declared that her new music was the real, more interesting show, and bigger news than the ceremony itself. (Indeed, her hosting of the ceremony felt lackluster, as though she were saving her charisma for her big announcement.)

Other big stars could have taken a lesson from Cyrus. Two years ago, the VMAs were widely promoted around the idea that Gaga and Perry, both promoting new albums, were in a “chart battle” of sorts. Their performances, buttressing the ceremony, were meant to be the point of a show that Cyrus stole with a specific awareness of the degree to which young people (and people) respond to boundaries being pushed. Whether her new album will live up to fan expectations remains to be seen, but once again, Cyrus has forced the culture to catch up with her.

Read next: The Weeknd’s VMAs Performance Got Kanye West Dancing and the Internet Loves It 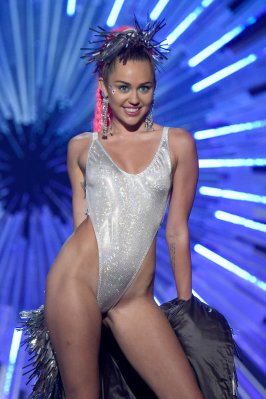 Miley Cyrus Drops Surprise Album During the VMAs
Next Up: Editor's Pick