Six years ago, Kanye West interrupted Taylor Swift to tell her that Beyoncé had one of the best videos of all time. On Sunday at the 2015 MTV Video Music Awards, Taylor Swift told Kanye West that he had some of the best videos of all time by presenting the rapper with the Michael Jackson Video Vanguard Award (MTV’s version of a lifetime achievement award, basically).

“I have been a fan of his since I can remember because Kanye defines what it is to be a creative force in music, fashion, and well, life,” Swift said in her introduction. Then echo-ing his infamous interruption, she said: “I’m really happy for you and I’mma let you finish, but Kanye has had one of the greatest careers of all time!”

Swift called West her friend and said that his album College Dropout was the first record she and her brother bought on iTunes. Then West gave a very long, seemingly improvised speech that ended with him admitting he was a little high (“I rolled up a lil’ something to knock the edge off!”) and trolling the audience by saying he was going to run for president in 2020. (Or was he trolling?) 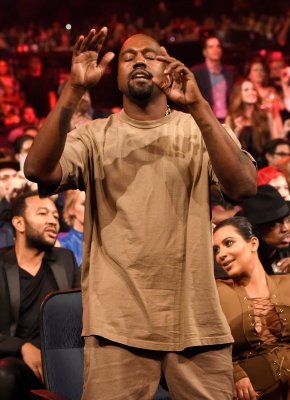 The Weeknd's VMAs Performance Got Kanye West Dancing and the Internet Loves It
Next Up: Editor's Pick