Huge Antigovernment Protests in Malaysia Continue for a Second Day

Saturday’s massive but harmonious antigovernment demonstrations in Kuala Lumpur continued overnight and into Sunday morning as historic numbers of Malaysians gathered in the streets of the capital to demand the resignation of Prime Minister Najib Razak.

“It’s what we need to do for the Prime Minister to hear our voices and realize we don’t need him anymore,” Abdul Muiz, a 26-year-old businessman in a plastic Guy Fawkes mask, told TIME early Sunday. “I think it’ll stay peaceful — the object is peaceful revolt, since we’re a peaceful nation.”

The marathon rally is expected to last until midnight on Sunday, which will mark the beginning of Merdeka Day, the anniversary of Malaysia’s independence from Britain in 1957.

By noon on Sunday, the crowd had swelled to rival Saturday’s, which drew 200,000 by organizer’s estimates and 20,000 by police’s. A number of protesters stayed in the streets near Merdeka Square overnight, sleeping on the pavement when tired.

The ongoing demonstration is the largest popular vote of no confidence to date against beleaguered Prime Minister Najib, who currently sits at the center of an unprecedented corruption scandal. In early July, the Wall Street Journal published a report stating that Najib’s personal bank accounts held around $700 million in cash that may have been siphoned off a struggling state investment fund called 1Malaysia Development Berhad.

Najib’s administration has denied the allegations — and penalized those who have corroborated them, including his Deputy Prime Minister, Muhyiddin Yassin, whom he sacked last month — claiming that the money was in fact a campaign donation from a benefactor in the Middle East. (A protester at Saturday’s demonstration could be seen dressed up as the elusive donor, donning an Arab-style tunic and holding a sign asking for his money back).

Nevertheless, the incident has provided disgruntled Malaysians with a reason to galvanize in opposition to the government. Many feel that the country is in rough shape economically and socially. The value of the ringgit, its currency, has tumbled; meanwhile, some sense that Najib is attempting to cling to power by emphasizing the ethnic divide between Malays and the country’s Chinese and Indian populations.

This confluence of tensions has driven tens if not hundreds of thousands of middle-class Malaysians into the streets for this weekend’s protests, which in the past have been the preserve of workers and student activists.

“This is my first Bersih rally. I’m politically conscious but apolitical — but these are national issues that impact all of us,” Syed Kabir, a 42-year-old engineer, tells TIME, sitting in a South Indian restaurant off Jalan Tun Perak, a major thoroughfare congested with yellow-shirted demonstrators. He identified as an ethnic Malay; his neighbors, Dr. Shanil Kumar and Michael Cheng, who sat with him at the table, were Indian and Chinese, respectively.

“This is how it was, and this is why we’re angry,” says Kumar, a general practitioner in Kuala Lumpur. “Malaysia is literally the perfect country — we have resources; we have a good ethnic balance — and it’s been completely spoiled by corruption and money politics. And we’re finally tired of it.”

The men say they expect to stay at the demonstration through midnight, and that they do not expect any violence or altercations with authorities. Though past public protests have ended when law enforcement brought out tear gas and water cannons, the police presence this weekend has been subdued.

“The police have learned that using force won’t fix the situation, but rather aggravate the issue at hand,” Syed says. “Violence would make the government seem worse than they already do.”

Others speculate that the police could in fact be sympathetic to the cause.

“I picked up one of the police [officers],” a Kuala Lumpur cab driver who requests anonymity tells TIME. “He said, ‘We all know [Najib] is in the wrong, but what can we do? We’re only following instructions and waiting until we can retire.’” 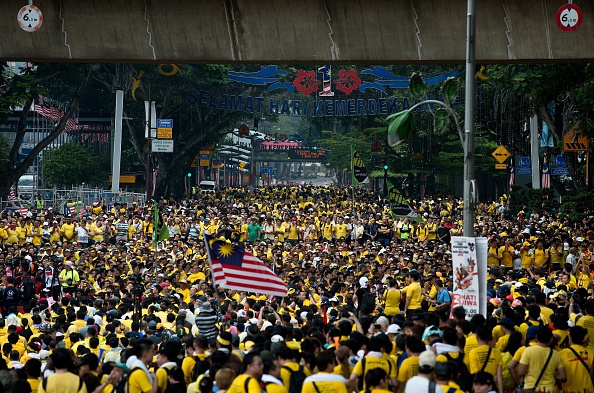 Malaysians Gather to Demand a New Politics
Next Up: Editor's Pick