Tens of thousands of Malaysians assembled near Kuala Lumpur’s Merdeka Square on Saturday to demand that Prime Minister Najib Razak step down from office.

The rally, one of the largest demonstrations against Malaysia’s government in recent memory, was the culmination of escalating public hostility toward Najib, especially after the Wall Street Journal reported that his private bank accounts held over $700 million in funds purportedly siphoned off a struggling state investment fund called 1Malaysia Development Berhad. Officials say the money came from private donors to be spent on the last general elections in 2013.

But, on Saturday, the call of the day — and the name of the anticorruption movement that organized it — was bersih, which means clean in Malay.

“Today, this matter is uniting the voice of the people of Malaysia, regardless of race, religion, age, or even politics,” Lim Kit Siang, head of Malaysia’s opposition coalition, told TIME. He stood next to Mohamad Sabu, who leads the country’s new, moderate Islamic party. “We all want to save Malaysia — to promote good governance, to reaffirm the promise of democracy.”

Though the government declared the demonstration unlawful, going so far as to criminalize the antigovernment’s yellow T-shirts, a historically large crowd gathered in the streets of Kuala Lumpur City Centre by early afternoon on Saturday, appearing from afar as a sea of neon.

“We’ve curbed our fear of the state, it seems,” K. Arumugam, a human-rights lawyer in the capital, said about the public’s dismissal of state warnings. “People are aware that they need to stand up.”

Unlike past demonstrations against Najib’s leadership, which have typically been the domain of student activists, laborers, and the politicians who support them, Saturday’s rally was in many respects a sociopolitical cross section of Malaysia at large. Families came out in droves. White-collar executives were said to have booked rooms at five-star hotels near Merdeka Square as to be close to the political action, which organizers intended to continue through Sunday night.

The turnout spoke to the endemic national frustration with what is seen as equally endemic political corruption. The recent accusations of malfeasance first levied in the Wall Street Journal last month — which Najib has denied, even sacking his Deputy Prime Minister for encouraging transparency in the matter — are only the latest development in a sociopolitical system marked by ethnic tension and economic languor.

“It’s supposed to be that the government works for us, not that we work for the government,” Jasmine Sim, a 30-year-old interior designer, tells TIME. “People are feeling the pinch of living in Malaysia. Our standard of living is worse and more expensive. Our society is built on old racial lines.”

Though the historical underpinnings of the current situation are complex, many Malaysians equate contemporary struggles with the leadership of Najib, who took office in 2009 and was returned in 2013 despite losing the popular vote in that election. (Malaysia’s Parliament operates under a “first past the post” voting system.)

“He promised transparency, he said he’d take away draconian laws … and people bought into that, until 2010, 2011, when people realized what he was saying and what he was doing were completely different,” Wong Chen, a Member of Parliament representing the opposition coalition, tells TIME as he travels to the demonstration.

The amplification of popular dissent in recent months had led some to anticipate violence at this weekend’s demonstration. But unlike past rallies, which have ended when the police used tear gas and water cannons, the atmosphere near Merdeka Square on Saturday was urgent but largely festive. Protesters tooted loudly on air horns. A group of students sang Dylanesque protest songs in Malay, interspersed with a few chords of Tracy Chapman’s “Talkin’ ’Bout a Revolution.”

One protester, standing near a stage where opposition leaders led the crowd in anti-Najib chants, raised a sign that said “Najib: Today Is My Birthday. Please Resign as a Gift to Me.” 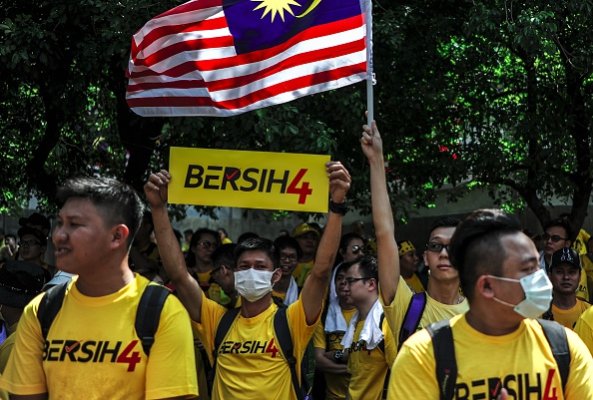 Large Crowds Gather to Demand the Ouster of Malaysia's Prime Minister
Next Up: Editor's Pick