Donald Trump is adding a new figure to the list of people he considers a loser: longtime Hillary Clinton adviser Huma Abedin.

During a Friday evening stop at a private picnic near Boston, the Republican White House hopeful and real estate mogul suggested that Abedin had shared classified information with her husband, disgraced ex-Rep. Anthony Weiner. Abedin, one of Clinton’s longest serving aides and now the vice chairman of her presidential campaign, was Clinton’s deputy chief of staff while she was Secretary of State and one of her most trusted advisers.

While Clinton’s critics are investigating her use of a private email server and whether classified information was sent to non-governmental accounts, no one had before suggested Abedin was passing sensitive materials to anyone who should not have had it. To Trump, Abedin is yet another shady figure involved in the never-ending saga of Clinton’s email practices as the nation’s top diplomat. “It all came through Huma,” whom Trump repeated called “YOU-ma.”

Weiner resigned from Congress amid a sexting scandal in 2011. Abedin remains married to him and they are raising a 3-year-old son.

“Think about it. So Huma is getting classified secrets. She’s married to Anthony Weiner, who is a pervert. He is. So these are confidential documents,” Trump said, taking his typical asides to add tangential information. “If you think that Huma isn’t telling Anthony—who she is probably desperately in love with, in all fairness to Anthony, because why else would she marry this guy? Can you believe it? She can’t see straight. Think of it.”

Trump said Abedin’s love for her husband likely compelled her to tell him things she should not have.

Trump’s decision to go after one of Clinton’s most loyal advisers was a new move for the real estate mogul, whose brash approach to the campaign has propelled him to the top of the polls.

Abedin started working for Clinton while she was an undergraduate at George Washington University and Clinton was First Lady. She went on to work for Clinton’s Senate office and her 2008 presidential campaign and followed her to this one. She’s a constant presence at Clinton’s side; Clinton has likened Abedin to the second daughter she never had.

Merrill, the Clinton spokesman, said Trump had gone too far: “Donald Trump has spent the summer saying offensive things about women, but there is no place for patently false, personal attacks towards a staff member. He should be ashamed of himself, and others in his own party should take a moment to stand up to him and draw the line for once. It’s embarrassing to watch, frankly.” 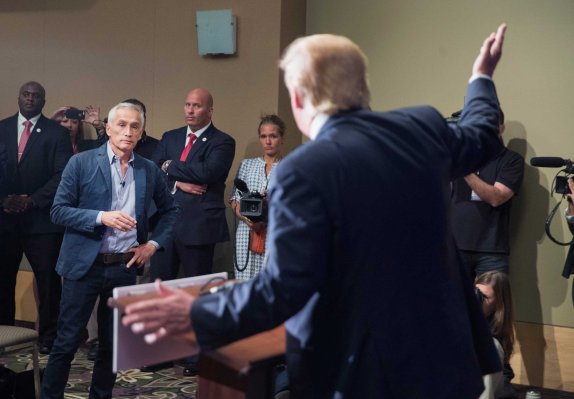 Jorge Ramos: Reporters Need to Get Tougher on Trump
Next Up: Editor's Pick