One candidate wants everyone to relax over those emails. A second is convinced he can start a political revolution. Another demands more debates. The other hopes you remember who he is.

What began as an orderly quorum to rally Democrats for the 2016 general election spiraled on Friday into a chaotic pageant of candidates slamming debate schedules, assuaging fears over emails, lambasting Donald Trump and demanding political revolution.

Four of the five Democratic candidates for president addressed the Democratic National Committee members and leaders at the party’s summer meeting in Minneapolis, each seeking something different.

The three-day confab is a key forum for the Democratic candidates to garner establishment support for their campaigns. Their speeches on Friday evinced tensions within the party and a wide range of interests. But one battle line was clear: there’s the establishment wing of the party, and there’s everyone else.

Here’s what each of the candidates aimed to prove at the DNC summer meeting, in the order that they spoke.

Lincoln Chafee: The former Rhode Island governor and senator, who has the mild demeanor of a mid-level manager, is polling at an unenviable 0.5%.

So Chafee spent most of his brief speech reminding the Democratic Party who he is. He boasted of his qualifications, telling the audience that as a prescient senator from Rhode Island in the early 2000s he voted against the Iraq War, warned of the dangers of climate change and supported a bipartisan immigration bill.

Plus, he has never been accused of a major scandal. “And all through these 30 years of public service, I’ve had no scandal,” Chafee said. “I’m proud of that.”

Hillary Clinton: The Democratic frontrunner, firmly in the lead for the nomination with nearly 50% in an average of recent national polls, aimed to assure the DNC’s leadership that she is the strongest candidate to rebuild the party after bad losses in the 2010 and 2014 midterms.

She vowed on Friday to help rebuild a Democratic Party whose ranks have been thinned by losses at the local and state level, telling top leaders of the Democratic National Committee that her campaign will help Democrats “win up and down the ticket.”

“I’m building an organization in all 50 states with hundreds of thousands of volunteers who will help Democrats win races up and down the ticket, not just the presidential campaign,” Clinton said. “You know, in 2010 Republicans routed us on redistricting, not because they won Congress but because they won state legislatures. It’s time to rebuild our party from the ground up. And if you make me the nominee that’s exactly what I’ll do.”

Meanwhile, her surrogates rounded up super-delegates at the DNC three-day meeting in an effort to build up a bulwark of support before the primary contests next year. Her goal is to assure Democrats uneasy after a rough August of press around her use of a personal email server.

Clinton also told reporters after her speech that the obsession with her emails is a passing fad. “I’m not frustrated,” she said in response to a reporter’s question, who asked her how she is feeling about a kerfuffle that has damaged her trustworthiness among voters. “I’m just trying to explain for people who have never had to follow this before that is is complicated. There’s nothing unique about [the] process being conducted around my emails.”

Clinton, whose Priorities USA super PAC was trailing behind Jeb Bush’s fundraising efforts by nearly $100 million as of June, compared high-dollar fundraisers to the wealthy industrial magnates of old. “The robber barons of the late-19th century handed public officials bags of cash,” Clinton said. “Now we have secret unaccountable money that distorts our elections and drowns out the voices of everyday Americans.”

The Republican Party, Clinton said, is scrambling over itself to look backwards. “The party of Lincoln has become the party of Trump,” she said.

The Democrats, on the other hand: “We’re building something that will last long after next November,” she said.

Martin O’Malley: O’Malley, the former governor of Maryland, has had the most trouble gaining momentum in the race despite months of campaigning and 15 years as an executive first in Baltimore and then in the Annapolis statehouse.

What’s more, the governor’s impassioned calls in primetime national television interviews for more Democratic debates have gone entirely unheeded. DNC chair Debbie Wasserman-Schultz has repeatedly defended the debate rules, which limit the number of debates to six and prohibit candidates from participating in any others.

That may explain why O’Malley delivered a barn-burning speech attacking the Democratic establishment for limiting the number of debates.

“The Republicans stand before the nation, malign our President’s record of achievements, denigrate women and immigrant families, double-down on trickle-down, and tell their false story,” O’Malley said. “We respond with crickets, tumbleweeds, and a cynical move to delay and limit our own Party debates.”

“This is totally unprecedented in our party,” O’Malley continued. “This sort of rigged process has never been attempted before. Whose decree is it? Where did it come from? To what end? For what purpose? What national or party interest does this decree serve?”

The Sanders section of the crowd roared their enthusiasm.

“We are the Democratic Party, not the undemocratic Party,” O’Malley continued. “Our party must not cower from this debate, we must engage the debate.”

When the speech was over, Wasserman-Schultz gave O’Malley a terse handshake. “Thank you, Governor O’Malley,” she said.

At the heart of Sanders’ message: Clinton can’t win the same grassroots support he can.

“Democrats will not retain the White House—will not regain the Senate or the U.S. House of Representatives, will not be successful in dozens of governors races all across this country—unless we generate excitement and momentum and produce a huge voter turnout,” Sanders said.

Sanders offered somber advice for the party heads. But he was more polite than O’Malley. “With all due respect, and I do not mean to insult anyone here, that turnout—that enthusiasm—will not happen with politics as usual.”

He also aimed some subtle jabs at Hillary Clinton, reminding his audience that he voted against the Iraq War (Clinton voted for it), and he opposes the Keystone Pipeline and the Trans Pacific Partnership (which Clinton has declined to take a stance on).

Jim Webb: The former senator for Virginia, who is at 1% in national polls, was the only candidate to skip the DNC meeting. Chair Debbie Wasserman-Schultz explained that Webb is “taking his daughter to college.”

Webb’s campaign, however, added another perspective. “His daughter off to college, yes,” spokesman Craig Crawford in an email to TIME. “But also think, just my opinion, you don’t have to read Machiavelli in his native language to understand that the DNC has picked their nominee. The DNC/HRC [Hillary Rodham Clinton] hookup is a shotgun wedding with no need for bullets.”

Also, Crawford told the IJReview that Webb talking to the DNC is “about as useful as sticking one’s hand into a wood chipper.”

By July 2016, the party will have chosen its candidate for president, and the DNC hopes that the losing candidates will fall in line. To hear the DNC leadership tell it, that won’t be a problem. “We are very happy with the cooperation and thank the candidates for the cooperation that we’ve seen from them to date,” Wasserman-Schultz said at the end of her prepared remarks Friday morning. “On to victory in 2016, my fellow Democrats, thank you so much!”

Read next: History Indicates That Donald Trump’s Campaign Could Be Trouble for the Left 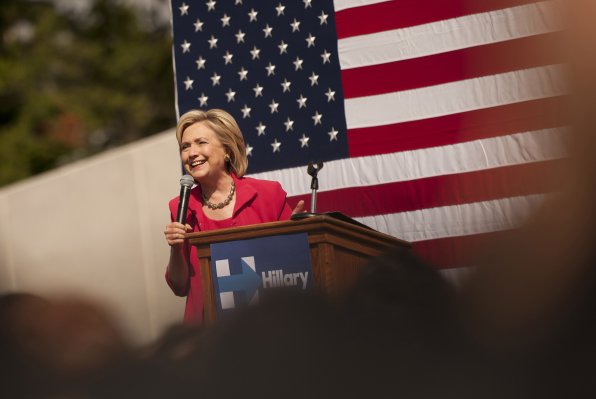 Hillary Clinton to Coordinate Fundraising with Democratic Party
Next Up: Editor's Pick