Behind Marvel’s Decision to Create These Controversial Female Superheroes

In the last two years, Marvel Comics, led by editor in chief Axel Alonso, has been earning new fans—and boosting its bottom line—by diversifying its comic books. Marvel went from publishing zero female-led comics in 2012 to 16 this year. The changes have been controversial among some comics fans, a notoriously obsessive group, especially the decision to hand Thor’s hammer to a woman and the creation of the Muslim teenage superhero named Ms. Marvel.

Alonso’s imperative to create comic books starring women that could sell collided with the restlessness of writer Jason Aaron, who wanted to find a surprising new direction for Thor, one of Marvel’s staple superheroes. In comic-book lore, Thor’s magical hammer, called Mjolnir, can be lifted only by whoever is deemed worthy to carry it. Aaron decided that the male Thor no longer qualified. “I liked the idea of Thor as a god who was always questioning his own worthiness,” Aaron says. “I like to think of him waking up every day and looking at the hammer and not knowing if he was going to be able to pick it up.”

But tampering with Thor–whose portrayal by actor Chris Hemsworth has helped fuel Marvel Studios’ cinematic success–was risky. Aaron took his idea to one of Marvel Comics’ semiannual retreats where dozens of writers and editors gather to chart the year ahead. His pitch was simple. Thor’s hammer had been handed briefly in the past to an extraterrestrial and even an amphibian. So shouldn’t fans be able to get behind another unfamiliar species–woman–lifting the weapon?

“I think if we can accept Thor as a frog and a horse-faced alien, we should be able to accept a woman being able to pick up that hammer and wield it for a while, which surprisingly we’ve never really seen before,” he says. Alonso approved, and work began on what would become Thor: The Goddess of Thunder #1.

The push for diverse characters expanded well beyond Thor. In the past two years, Alonso and his team have launched 16 new titles starring women. One of the most significant moves was transferring the mantle of Captain Marvel, a hero who first appeared in 1967 to the Carol Danvers character, who had been toiling in the understudy role of Ms. Marvel.

That created a job opening in the superhero universe–and two of the top creative women in the comics industry proposed a fresh character to fill it. Marvel director of content and character development Sana Amanat–whom Alonso calls the driving force behind the publisher’s female-friendly initiatives–reached out to G. Willow Wilson, a highly regarded writer who also happens to be one of the few Muslim women in the business. In February 2014, they introduced a new Ms. Marvel: Kamala Khan, a 16-year-old Muslim girl struggling to fit in who uses her shape-shifting powers to protect her hometown of Jersey City, N.J. Some fans blasted the new story line–a few even accused Amanat and Wilson of somehow promoting jihad–but the book quickly earned a spot on the New York Times list of best-selling paperback graphic books.

Wilson says the payoff was worth the risk. “I thought they were going to need an intern to open all the hate mail,” she says. “Now I have people you would least expect–like this giant, blond, bearded guy I met in Denver–telling me how they connect to Ms. Marvel because they were made fun of in school for being different.”

Read the full feature on Marvel’s new, diverse characters from this issue of TIME 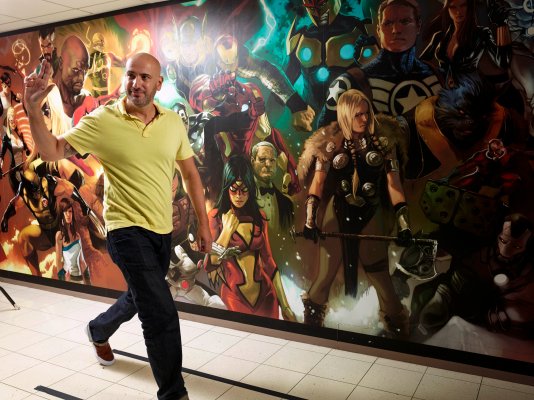 Everyone’s a Superhero at Marvel
Next Up: Editor's Pick