These 5 Facts Explain the Global Impact of China's Impending Slowdown

An investor looks at an electronic board showing stock information at a brokerage house in Beijing on Aug. 27, 2015.
Jason Lee—Reuters
By Ian Bremmer

China’s up and down summer continues. Despite the blaring headlines warning of a dangerous economic slowdown—and starting recent drops in the stock market—the underlying fundamentals of China’s economy remain strong. That’s good news for Beijing, but not very comforting for countries that have bet their economic futures on China’s non-stop ascent. These five stats explain which countries have the most to lose from China’s inevitable slowdown.

In the first three days of trading this week, the Shanghai Composite Index fell 16.61 percent. Monday’s mayhem dragged down stock exchanges across the globe, but world markets had stabilized by Tuesday. China’s freefall continued into Wednesday, when an interest rate cut finally stanched the bleeding. This hasn’t been a kind summer to the emerging market giant—from June 15 to August 27, the Shanghai Index fell about 40 percent.

Market turmoil always makes for great headlines. But the real story coming out of China is its continued economic deceleration. In 2007, China’s economy grew by 14.2 percent, according to the IMF. In 2010, it slowed to 10.4 percent. This year, China’s leadership is shooting for “about 7 percent.” The slowdown is necessary as Beijing transitions from an export-oriented economy to a more sustainable consumption-oriented one. Yet, the rising tide of anxiety outside China in recent weeks makes clear that some countries aren’t yet ready for what China’s president has called a “new normal.”

China’s downturn comes at an especially inconvenient moment for Saudi Arabia, Russia and Venezuela, countries that supply a healthy percentage of China’s imported oil. According to the latest figures from the Energy Information Administration (EIA), Saudi Arabia exports 14 percent of its oil to China; Russia sends 14 percent, and Venezuela 10 percent. Oil prices have plummeted from more than $100 a barrel this time last year to about $45 this week. Falling demand from China makes near-term recovery unlikely and could pull prices down even further.

With the lifting of sanctions on Iran, Saudi Arabia now faces a revitalized, oil-producing heavyweight regional rival; Russia must worry over the long-term impact of Western sanctions; and Venezuela’s Bolivarian revolution now lives oil-paycheck to oil-paycheck. For the past 20 years, these governments could count on Beijing’s unquenchable thirst for oil. That’s now in doubt.

Oil is only the beginning of this story. Commodity prices generally have been sliding since 2011, and commodity-exporting countries have felt the pain. In fact, the value that producers of oil, gas, metals, minerals and other commodities have lost just in the past year comes to about $2 trillion, the size of India’s entire economy. Much of the slide is attributed to weakening global demand for basic resources and minerals, and China’s shift away from manufacturing doesn’t help. China still imports more than half the metals exported by Australia, Peru, and Indonesia and more than a third exported by Brazil and Chile. In fact, Australia (36 percent of its total exports to China), Chile (24 percent), Indonesia (13 percent), Brazil (19 percent) and South Africa (10 percent) were already exposed to China through their overall trade numbers. But it’s their deep dependence on commodities that puts them most at risk. 86 percent of Australia’s exports to China are commodities-based—for Chile it’s 92 percent, 71 percent for Indonesia, 45 percent for Brazil and 86 percent for South Africa. China’s slowdown does not bode well for any major commodity exporters, but this group is particularly vulnerable.

Some of these governments haven’t done enough to diversify their economies away from over-reliance for growth on commodities exports. But even well-diversified economies have something to lose from a Chinese slowdown. That’s because China, already the world’s second largest economy, has become crucial for global trade over the past two decades. In 2000, China accounted for just 3 percent of the global goods trade. By 2014, that number had jumped to 10 percent. China became the world’s lead trading nation in 2013. China by itself accounted for about 17 percent of the world’s overall GDP in 2014, but its demand for imports has already fallen 14.6 percent over the first seven months of 2015.

In other words, China’s down-trending growth will have an impact on virtually every country in the world.

What to look for next? We shouldn’t worry too much about the gyrations of China’s lead stock market. Foreigners own just 1.5 percent of shares in the Shanghai Index, and unlike more mature markets in the United States and Europe, China’s market tells us little about the fundamentals of China’s economy. Nor is the meltdown hurting the average Chinese consumer. Just 1 in 30 Chinese people own stocks today compared to the 1 in 7 Americans who are invested in American markets, many of them through 401(k) retirement accounts. But given how opaque the Chinese leadership is, observers grasp at anything they think hints at the true state of the Chinese economy. Don’t be fooled—the global economy is sending plenty of legitimate warning signals. Shanghai’s swinging stock market just isn’t one of them. 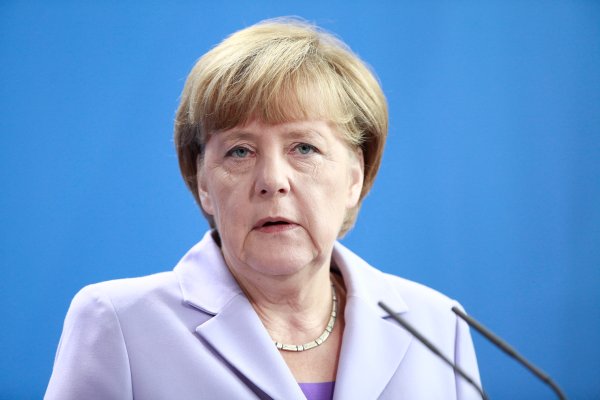 Angela Merkel's Name Now Means "To Do Nothing"
Next Up: Editor's Pick