A view of the bodies of dead migrants that were recovered by the Libyan coast guard after a boat sank off the coastal Libyan town of Zuwara, west of Tripoli, on Aug. 27, 2015
Hani Amara—Reuters
By Joanna Plucinska

A boat filled with migrants mainly from Africa sunk off the coast of Libya while en route to Italy on Thursday. Officials on the ground were unable to confirm the exact number of casualties, but estimate that up to 200 people may have died, according to Reuters.

The crammed vessel had over 400 passengers and set off from the western Libyan town of Zuwara, a major hub for smugglers looking to take migrants to the Italian coast, Reuters reports.

The boat quickly capsized, leaving many of the passengers trapped inside. According to a Libyan official who spoke to Reuters anonymously, the Libyan coast guard managed to save up to 201 people from the sea, with around 147 of them ending up at a nearby center for illegal migrants in the town of Sabratha.

While many of these migrants understand the risks of taking these overcrowded boats, they are desperate to flee conflict, persecution and extreme poverty in their home countries. In this case, the boat’s passengers included migrants looking to escape sub-Saharan Africa, Pakistan, Syria, Morocco and Bangladesh, an official told Reuters.

On Wednesday, Swedish rescue crews discovered a wooden boat off the coast of Libya with 51 dead migrants left behind in the hull, the Associated Press reports. They were able to rescue 439 of the other passengers.

More than 2,300 people have died so far this year while making the extremely perilous crossing from Northern Africa to Europe, according to the International Organization for Migration. 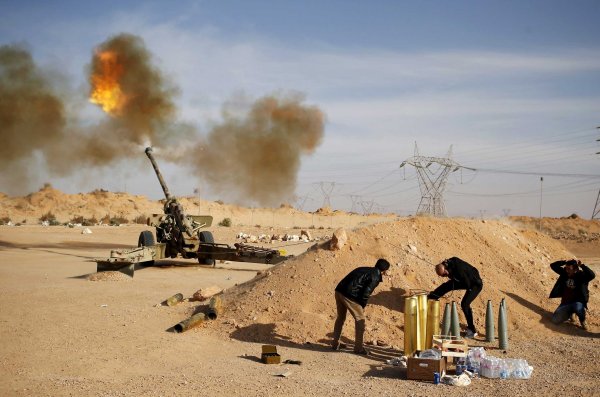