What to Know Before the U.S. Open

You may have heard: This is the summer of Serena.

At the 2015 U.S. Open, which starts Monday in New York, Serena Williams will be chasing down two milestones in tennis history. With a title, she’d become the first woman to win a calendar year Grand Slam—a sweep of the Australian Open, French Open, Wimbledon, and U.S. Open—since Steffi Graf did in in 1988. At the same time, a victory would give her 22 career major tournament singles titles, tying Graf’s mark and leaving her just two behind the all-time leader, Margaret Court. “It is time to look around you,” Darren Cahill, the tennis coach and ESPN commentator, said during the tournament’s draw ceremony, “and appreciate the moment we’re in.”

Serena’s not the only player shining. On the men’s side, Novak Djokovic, for one, is having a fine year himself. His only Slam loss came in the French Open final, to Stan Wawrinka. Djokovic is aiming for a repeat of 2011, his breakout year, when he won the Australian, Wimbledon, and then owned New York. A 2015 U.S. Open title would give Djokovic 10 Grand Slam tournament wins. It sure seems like he has many more in him: Will Djokovic be the player to top Roger Federer’s record 17 titles?

Not that Federer’s done winning, himself. His impressive effort at the Cincinnati tune-up tournament has Fed-fans chirping. The New York crowd will want nothing more than one last cheer for the five-time U.S. Open champ. Plus that little Serena Grand Slam on everyone’s mind.

Here’s a closer look at the this year’s tournament, bracket by bracket.

American Onslaught United States Tennis Association president Katrina Adams drew the names for this year’s tournament, and promptly made life miserable for several American women, as Venus Williams, Madison Keys, and Sloane Stephens—the top American hopes not named Serena—were all placed in Serena’s bracket. But fans win here, as Serena’s road to the semis is now festooned with potentially compelling matches: She could meet Stephens in the third round, Keys in round of 16, and her big sister in the quarterfinals. Another name to remember in this bracket: Belinda Bencic, the Swiss teen who stunned Williams in the the semifinals of the Toronto tournament earlier in August.

Maria’s Out With Maria Sharapova pulling out of the Open due to injury, this bracket, already relatively weak, just got a whole lot weaker. The highest-seeded player here is Ana Ivanovic, at No. 7. One to watch: Heather Watson of Great Britain, who almost knocked off Serena at Wimbledon and is seeking her first U.S. Open win.

Woz World Caroline Wozniacki wants to spoil her good friend’s life. Off the court, Wozniacki and Serena are pals: Williams helped Wozniacki through her high-profile breakup with golf star Rory McIllroy last year (they were engaged to be married). On the court, Wozniacki is a threat: She made last year’s finals, where she lost to Williams, 6-3, 6-3. Also lurking in this bracket is the last woman to win a U.S. Open besides Serena, Australian Samantha Stosur, who took the 2011 title, and Petra Kvitova of the Czech Republic, who has won two Slams on grass (Wimbledon in 2011 and 2014), but has yet to conquer hard courts.

Challenge Bracket If you had to bet on a bracket to produce the player who upsets Williams, put your chips on Simona Halep’s quarter. Halep is seeded second in the tournament. Although Williams beat her in the Cincinnati final in August, Halep handed Williams one of her worst hard court losses, a 6-0, 6-2 drubbing during the round robin stage of last year’s WTA championships. Victoria Azarenka is also lurking here. Williams has won a startling 30 out of the last 32 tournament finals she’s played, but Azarenka handed her both those losses, in Doha and Cincinnati in 2013, both on hard court. She’s also pushed Williams to three sets at the US Open, in the 2012 and 2013 finals.

Big Name Quarter For the second time this Grand Slam season, Novak Djokovic and Rafael Nadal are poised to meet in a quarterfinal, a sure sign that Nadal’s game has tailed off this year—he’s an 8th-seed. (Djokovic beat Nadal on clay at the French Open, ending his 39-match winning streak at that tournament). Nadal will be lucky to make it that far. He could meet fellow Spaniard Feliciano Lopez, who beat Nadal in the third round in Cincinnati, in the round of 16.

Small Name Quarter What the other bracket on Djokovic’s side of the draw lacks in star power—no Nadal, no Andy Murray, no Roger Federer, not even a Stan Wawrinka—it makes up for in next-wave talent. Last year’s U.S. Open finalists, defending champ Marin Cilic and Kei Nishikori, headline the group, along with the player many pros see as the most naturally gifted upstart: Grigor Dimitrov of Bulgaria.

Andy vs. Nasty Enemies of Aussie Nick Kyrgios—there are many, including, apparently, Nadal—surely cheered upon hearing that that he’d face a top opponent like Murray, the third seed, in the first round. Kyrgios’ meltdown at Wimbledon, where he repeatedly cursed and appeared to quit on his match, and in Montreal, where he insulted the girlfriend of Stan Wawrinka, have put him in the headlines. Murray should cut Kyrgios’ New York stay short. The 2012 Open champ could face Wawrinka in the quarterfinal.

Fed Finale One thing that tennis pundits could agree upon at the draw ceremony: Federer got a pretty friendly path to the semis. Sure, American John Isner, a potential round of 16 opponent for Federer, could always serve his way to an upset on home soil. And Tomas Berdych, who would play Federer in the quarterfinals, did bounce Federer out of the Open in that round three years ago. But Federer says he’s feeling real good. He reached the semis last year. Could his first finals appearance since 2009 be far behind? 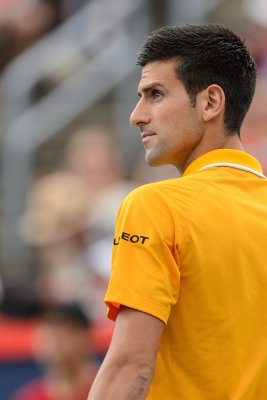 Djokovic Complains About Pot-Smoking During Match
Next Up: Editor's Pick