It’s a tough time to be a kid in America: playtimes are getting shorter, piles of homework are getting taller, obesity rates are sky-high and there’s not enough time to sleep well (at least for middle and high schoolers). In the past, policymakers, medical professionals and federal officials have tried to fix these issues by educating parents on the importance of healthy eating and encouraging them to set limits on screen time. But experts are increasingly looking to effect policy changes in the places kids spend the bulk of their waking hours: schools.

In recent years, U.S. schools have started to experiment with a variety of reforms designed to make students happier, healthier and better prepared to live and eventually work with people of all backgrounds. Of course, realizing these goals is by no means easy, especially amid widespread budget cuts. (Most public schools are getting less state funding than they were before the recession.) And even though debates over issues like teachers’ unions and Common Core are sure to get more attention as the 2016 election nears, some innovators are making headway with fresh ideas that are starting to stick–and may even scale–in American classrooms.

[This article consists of 8 illustrations. Please see hardcopy of magazine or PDF.]

Many U.S. schools now offer healthy food options, but getting kids to bite is tough; students who buy school lunches opt for fruits or veggies only about half the time, and even fewer actually eat them, according to findings from the Johns Hopkins Bloomberg School of Public Health. In an effort to curb that trend, Buckingham County K-5 public school in Dillwyn, Va., redesigned its kitchen (left) so kids can see fresh foods as they are being prepared. The school also encourages kids to grow produce in the school garden. “We wanted to reimagine the school as a platform for delivering wellness,” says Dr. Matthew Trowbridge, who helped develop the project. Early data shows students are actively using the new features, even without prompting.

Homework is crucial to the kind of learning done at the middle-and high school level, but new research suggests that elementary students do not tangibly benefit from doing after-school work with their parents. With that in mind, several schools, like Gaithersburg Elementary in Maryland, have ditched it for a simpler task: read whatever you want for 30 minutes a night. Although it’s too early to judge the results, principal Stephanie Brant says students seem to be much more engaged in class since Gaithersburg started the program in 2011, adding that many are performing “at higher levels” than students in years past who did traditional homework.

At a time when adolescent obesity rates are quadruple what they were 30 years ago, experts say it’s time to start thinking about recess not as a break but instead as a rare opportunity for kids to move around, which is good for body and mind. During seven-hour school days, physical activity helps kids “recharge their brains,” says Avery Faigenbaum, who teaches pediatric exercise science at The College of New Jersey. And yet, in the past few years, some 40% of U.S. school districts have reduced or eliminated recess to make time for more academics and test preparation. One workaround: incorporating fitness into everyday classroom lessons, as some Bronx schools are doing.

Most elementary-school students are routinely screened for vision and hearing, but there’s no protocol for detecting psychological issues. That means kids with conditions like anxiety and depression can go undiagnosed for years, delaying treatment and exacerbating symptoms. Boston’s public-school system is trying to prevent that. Twice a year, students are evaluated on social, emotional and behavioral functioning; those in need get in-school resources like psychologists as well as referrals for outside care. “We really want to make a difference,” says Andria Amador, who helped launch the program in the 2012–13 school year.

For minorities and white students alike, studies show that attending a diverse school can lead to higher academic achievement and better preparation for real-world work environments. And yet a series of Supreme Court decisions has allowed most integration plans to dissolve, leaving schools across the U.S. more segregated than they were in 1968. Several states are trying to reverse that trend. Connecticut is beginning to make progress through a network of magnet schools that attract kids of different backgrounds. For the 2012–13 school year, its classes were 30.2% white, 31.4% black, 30.5% Latino and 4.4% Asian–well above the national average for diversity.

Punishments like detention or getting sent to the principal’s office remove problematic kids instead of addressing what made them misbehave in the first place. Not so at Durham Community School in Maine, where teachers emphasize dialogue as discipline. If a kid jumps around during class, for example, the instructor will ask him to offer up his own idea on how to correct his disruption (standing for 10 minutes during a lesson, perhaps). This approach, developed by psychologist Ross Greene, was implemented in 2011. During the 2012–13 school year, there were just eight recorded instances of classroom disruption, down from 103 during the school year when the program started.

Kids have always learned best when they get personal attention. Now more than ever, that attention is coming in part from computers–and often to great effect. One leading tool (with more than 10 million users) is Knewton, a virtual platform that adapts to a student’s needs in real time. If he is struggling with a math concept, for example, Knewton will recommend a set of problems to help him understand it, based specifically on his learning strengths. The goal for K-12 schools is to replicate the success Knewton has had in higher education, where its products have led to better pass rates.

In order to stay healthy, adolescents need at least eight hours of sleep each night; deprivation can lead to weight gain, focus issues, lower academic performance and other problems. But biologically, adolescents are hardwired to stay up late, often until 11 p.m. or midnight. That’s why federal officials and medical experts are calling for middle and high schools to start later–at or after 8:30 a.m. (Right now, fewer than 1 in 5 do.) On that schedule, 60% of students will get at least eight hours of sleep, according to findings from the University of Minnesota. That’s a significant improvement over most of their peers. 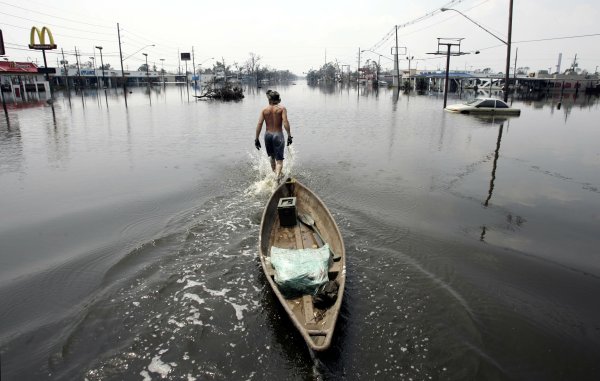 How to Prevent the Next Hurricane Katrina
Next Up: Editor's Pick