It's a Deadly Summer for U.S. Cities

On Aug. 19, Baltimore police found a 28-year-old man wounded from a gunshot. He was taken to a hospital, where he died later that night. The incident would likely have attracted little notice, except that the unidentified man was the 212th homicide victim in the city this year, surpassing the total for all of 2014 with more than four months still left in the year.

It’s been a long, smoldering summer in Charm City, where the embers from April’s riots over the death of Freddie Gray in police custody still burn white hot. The city of 600,000 is averaging more than one homicide a day and has seen more killing than New York City, which has 13 times as many people. But while Baltimore’s gruesome tally may be extreme, the city is no outlier.

Across the U.S., cities have been experiencing a surge in murders and violent crime. Milwaukee has already topped its 2014 mark. New Orleans, St. Louis and Washington are all on track to do the same. Even Hartford, Conn., a city of 125,000, has had 21 murders so far this year. In all of 2014, there were 19. And on Aug. 26, two journalists from a Roanoke, Va., television station were shot dead in a grisly on-air attack. Though the shooting occurred outside the city, Roanoke too has already had more than twice the number of murders this year as last.

Coming after years of national decline, the rise in deadly violence has experts struggling to come up with an explanation. To some, it’s the so-called Ferguson effect, a theory that police have been more hesitant to use force since the fatal shooting of Michael Brown. As an example, proponents point to Baltimore, where arrests dropped by more than half in the months after Gray’s death.

Others say a move toward less confrontational police tactics has created an easier climate for criminals. New York City, for instance, moved away from a policy of stopping and frisking anyone deemed suspicious after a federal judge found it disproportionately targeted minorities. So far, homicides in the Big Apple are up almost 10% over last year.

Still, more cities say the problem is not the cops but the criminals. Milwaukee police say Wisconsin gun laws make it too easy to get a firearm. Chicago has stringent gun controls, but officials there fret the laws mean little when guns are widely available in nearby states.

Not every city has had a similar increase. Philadelphia’s homicide rate remains near last year’s, while Los Angeles is on pace for fewer killings. “This is Chicken Little thinking that the sky is falling,” says Northeastern University criminologist James Alan Fox. “It’s not.” Fox argues that there is not yet enough data to conclude whether violent-crime rates are trending upward for the long haul. While shifts in policing could be having an effect, Fox says they are likely temporary, akin to month-to-month changes in the unemployment rate.

A more likely explanation is that it just isn’t realistic to expect violent crime to remain at near historic lows year in and year out. “The problem is you sometimes become a victim of your own success,” Fox says.

Determining whether this spike is an anomaly or the start of a long-term trend will likely take a year or two–cold comfort to families mourning those lost in this violent summer. 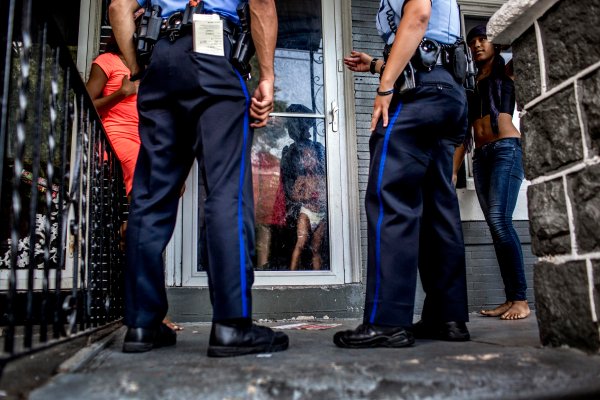 What It's Like to Be a Cop in America
Next Up: Editor's Pick