Vice President Joe Biden speaks at a memorial service to honor those killed in the shooting at the University of Tennessee on August 15, 2015 in Chattanooga, Tenn.
Jason Davis—Getty Images
By Zeke J Miller

U.S. Vice President Joe Biden may still be mulling his 2016 chances, but many voters appear open to his potential candidacy, a new survey finds.

A Quinnipiac University poll released Thursday finds Biden with the highest favorability rating in either the Democratic or Republican field among all voters, and leading head-to-head match-ups against hypothetical GOP rivals. But Biden, whose numbers are boosted by his near-universal name-recognition, trails former Secretary of State Hillary Clinton and Vermont Sen. Bernie Sanders in the race for the Democratic nomination.

Clinton commands the support of 45% of Democrats nationally, down from 55% a month ago, followed by Sanders at 22% and Biden at 18%.

On the Republican side, Donald Trump maintains a commanding lead of the GOP field with 28% of Republican support, followed by retired neurosurgeon Ben Carson at 12%. No other GOP candidate breaks double-digits, with a large cluster in a statistical tie filling out the top 10. Former Florida Gov. Jeb Bush, Florida Sen. Marco Rubio and Texas Sen. Ted Cruz are tied for third place with 7% each, representing a significant drop in support for Bush, who has raised more than $120 million for his presidential run.

The survey is one that will be used to determine eligibility for next month’s CNN debate at the Ronald Reagan Presidential Library, in which polls since July will be averaged and the top 10 placers fill the prime-time stage. Former HP CEO Carly Fiorina, whose performance was well regarded in the Fox News debate, merits 5% in the Quinnipiac poll, a significant jump. But her campaign complained Wednesday that a relative lack of polling before the second debate could still keep her out of the debate. Kentucky Sen. Rand Paul fell to 2%, as his campaign has faltered this summer.

Trump remains deeply disliked by the majority of voters who are not his supporters; 26% of Republicans say they would never vote for him and 54% of all voters view him negatively. Clinton, who is still dogged by questions about her use of a private email server, now has 61% of Americans viewing her as untrustworthy and 51% viewing her unfavorably.

Asked an open-ended question about the first word that pops into their minds when they hear a candidate’s name, “liar” topped the list when the 1,563 registered voters were surveyed about Clinton. “Arrogant” was the top word for Trump and “Bush” for Bush. 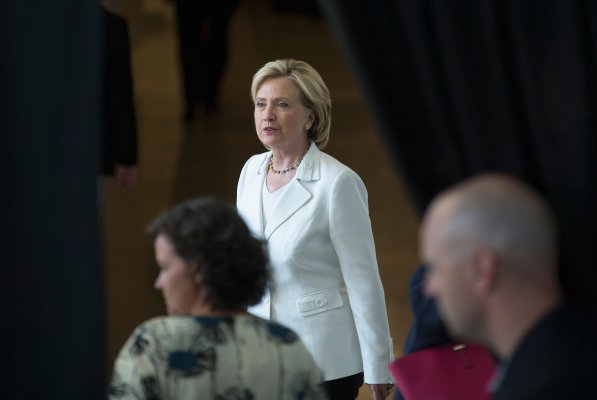 Hillary: Joe Biden Should Do 'What's Right for Him'
Next Up: Editor's Pick