Donald Trump during a news conference ahead of a rally in Dubuque, Iowa on Aug. 25, 2015.
Daniel Acker—Bloomberg via Getty Images
By Gregg Schwartz / Entrepreneur

Donald Trump has taken over the 2016 Republican presidential primary campaign. Whether you agree or disagree with him, there’s no denying that his candidacy has been a powerful force in the race and has commanded a great deal of media attention.

Time will tell whether Trump’s campaign will be successful in winning the nomination, but he’s already been very successful at generating headlines. Despite his brash demeanor and highly questionable (some would say “hateful” or “stupid”) statements, as of this writing, Trump just keeps rising in the polls.

Regardless of what happens with Trump’s presidential campaign, he’s already a winner in the constant battle for public attention. Here are a few marketing lessons from Trump that any brand or political cause can emulate:

Donald Trump doesn’t care if you love him or hate him. He’s playing to a very select crowd of voters who believe in his message and who want to support him. There’s something about Trump’s tough-talking “I don’t care what the experts think” attitude that appeals to Republican primary voters in 2015. Lots of Republican primary voters are feeling frustrated and are passionate to take back the White House. Trump is giving voice to feelings that are widely shared in that political party.

In the same way, your brand doesn’t have to appeal to “everyone.” Know your target market and speak to their concerns in a relevant way.

Love him or hate him, Donald Trump knows who he is. The Trump that we’re seeing on the campaign trail is well known to New Yorkers (I’m a native New Yorker myself). We have watched him for decades become famous as a New York real estate developer, bestselling author and TV reality-show contest business mogul on “The Apprentice.” Trump hasn’t changed. He’s just talking about politics now instead of business deals. But he’s always been bold and brassy, with a take-no-prisoners attitude.

The lesson: Your brand needs to stand for something. Lots of people are not fans of Trump, but even people who oppose his candidacy find themselves grudgingly admiring the consistency of his brand message. What you see is what you get.

Trump has said a lot of outrageous things during the campaign, from inflammatory remarks about Mexican immigrants to accusing John McCain of not being a “war hero,” but every new media gaffe or media whirlwind just seems to boost his performance in the polls. The reason: Trump’s core supporters respect him for speaking his truth, even if he’s not saying it in a polite, genteel way.

Most political candidates are so polished and focus-grouped that it’s almost impossible for their real feelings and emotions to come out. Trump is in your face, every day, with unvarnished depictions of life as he sees it. He’s not afraid of what anyone thinks about him, and it shows.

The lesson: Don’t be afraid to really stand for something as a brand, even if it’s controversial. Too many companies try to be blandly inoffensive in a failed attempt to be “mainstream” and appeal to “everyone.” It’s better to be memorable, even if you lose some customers who don’t “get it,” as long as you keep appealing to the niche market of customers who love you the most.

Trump doesn’t follow focus groups. All candidates these days test out their message, trying to find the right combination of words and issues to appeal to the right demographic segments of voters. But often, candidates end up sounding excessively “focus-grouped.” The real human connection of the candidate gets lost in trying to appeal to too many people. Trump seems to be resonating with conservative Republican voters because he’s so unrehearsed and unpolished — he’s not afraid to speak off the cuff. Every day on the campaign seems like he’s just really talking about whatever is most urgently on his mind at that moment.

The same goes with your product. It’s good to do some market research to find out whether a new product is viable, but it’s even more important to trust that you have a good idea. If you feel that way, trust that others will feel the same. I’ve seen so many great ideas become convoluted and watered down, when there are too many cooks in the kitchen. If you try to make your product appealing to everyone, you’ll ultimately end up appealing to no one.

Trump is like no one else we’ve seen in presidential politics in recent years. He seems to have absolutely no sense of regret or shame. He says what he says, he calls it like he sees it, and then he moves on, ignoring the critics. Has Trump ever apologized for anything? He seems incapable of admitting to mistakes or being wrong.

It’s hard to know when to draw the line. If you apologize too often, you’ll find yourself catering too much to customers who really don’t understand the value of what you offer. But if you don’t apologize when an apology was really warranted, you might damage your brand. You have to toe the line between maintaining your brand reputation and doing the right thing. Don’t spend all of your energy on trying to make bad customers happy.

Trump embodies the purity of a certain kind of bold, no-apologies approach to doing business. He’s almost Zen-like in his clear-headed refusal to get bogged down in details of saying “sorry.” He just keeps moving forward and on to the next deal. There’s something so refreshing about that, but not all brands can pull it off.

Whether you’re voting for Trump or not, there’s no denying that he’s a fascinating one-of-a-kind figure in American politics and business. You don’t have to become like Trump to learn from how he’s marketed himself and built his brand. 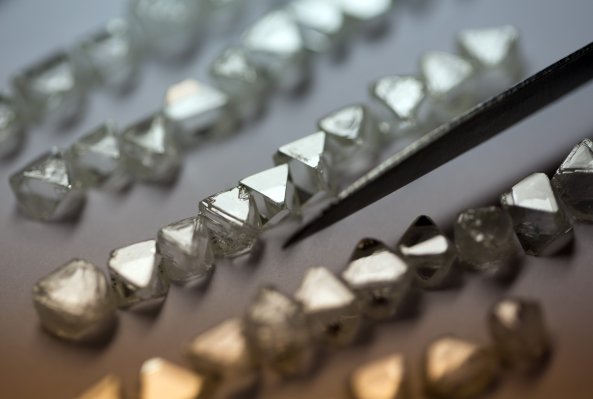 Now You Can Make Diamonds in a Microwave
Next Up: Editor's Pick