The Rise of the Weeknd: 'I Want to Make Pop Cool Again'

A lot has changed for the Weeknd—the intentionally misspelled musical project of 25-year-old Abel Tesfaye—since he dropped a series of mixtapes in 2011. Back then, the Toronto native was releasing nightmarish odes to getting high and getting laid while steering clear of attention. Now, he’s working with some of the biggest hitmakers in the world, he scored a No. 1 single with “Can’t Feel My Face,” and he’s about to release one of the most anticipated albums of the summer, Beauty Behind the Madness.

But as he lets you know on the album’s Kanye West-produced track “Tell Your Friends,” he’s “still that n—a with the hair singing ‘bout popping’ pills, f—ing b-tches.” He’s more comfortable in the spotlight now, but Tesfaye’s rise to stardom may have more to do with the mainstream accommodating him than the other way around. “The game is changing with songs like ‘Earned It’”—his hit from the Fifty Shades of Grey soundtrack—”as opposed to it changing me,” he tells TIME over email for the new issue hitting stands this Friday. Below, some of the highlights from the interview:

On his decision to embrace the spotlight:

“My cult following is so strong already. Thanks to my fans that have been with me from the beginning, I was able to sell out arenas on my own. I just felt like I was selling myself short. The last album [2013’s Kiss Land] was rushed. Even though I’m proud of it, I didn’t get to spend as much time as I wanted, but it was a great learning experience. I took my time with my new album. I learned, I studied and I delivered. I want the world to hear my music and see the movement my fans and I have created.”

On the breakthrough success of “Earned It”:

“I was arousing people’s curiosity. I think the game is changing with songs like ‘Earned It’ as opposed to it changing me because ‘Earned It’ was very important. It was slow, it was sexy and it was smooth—all traits in my music. ‘Earned It’ made people believe that I was my own hit maker, and we’re seeing that again now with ‘The Hills.’ It made me feel confident in myself before I started connecting with the monster hit makers.”

On his relationship with the controversial “alternative R&B” label often applied to him:

“Alternative R&B is in my soul. It’s not going anywhere. When I put out songs from House of Balloons in 2010 people said I made R&B cool again. I’m assuming that’s when the label was created. I feel honored that a good part of today’s music is inspired by it, consciously or subconsciously. The only way I could have done that was to be ambitious and grand. That’s what I want to do with Beauty Behind The Madness. I want to make pop cool again, and the only way I can do that is by being ambitious and grand.”

On preserving his identity in the studio with veteran producer Max Martin:

“At first I had to make it clear that when any producers work on my album, they have to come into my world. Max and I bashed heads, but it only made our relationship stronger. I knew that I was jumping into different waters and he knew he was working with a different kind of artist.” 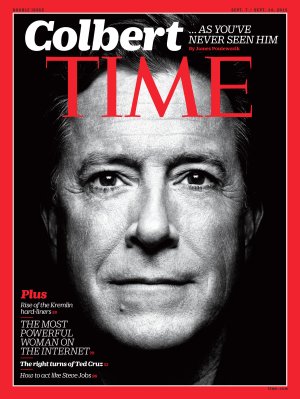 5 Things We Learned About Stephen Colbert
Next Up: Editor's Pick