On the issue of immigration reform, President Obama has much more than a mere friend in Pope Francis. In fact, if the White House allowed for it, he could have a de-facto spokesperson on immigration reform in the Holy Father.

Much like he used the pope’s words to successfully frame the income inequality debate last December, President Obama should again go back to Francis to restart the immigration reform debate in Washington.

He has a lot to work with. Since taking office, Pope Francis has put respect for immigrants’ right at the top of his agenda. In his first pastoral trip, he visited the Italian island of Lampedusa, where hundreds have died in recent months trying to immigrate into Europe from North Africa.

“We are a society which has forgotten how to weep, how to experience compassion—’suffering with’ others: the globalization of indifference has taken from us the ability to weep,” he said. His compelling message on the rights and dignity of immigrants transcend ideology. It also provides a great context for advancing this great cause of comprehensive immigration reform in our country.

The functional politics of immigration reform is rather simple: we need Speaker Boehner, a Catholic from Ohio, to muster the political courage to bring immigration reform to a vote on the House floor. Once there, it’s clear the bill would pass with bipartisan support. But Boehner has been held back by the lack of agreement in his own party, and the risk that he could lose his job as speaker if he moves forward with immigration reform.

The truth is that he’s probably right. But if we are to believe the testimony of Pope Francis, something greater than Speaker Boehner’s political future is at stake.

This is where the President of the United States needs to speak clearly. Drawing directly from Francis, President Obama needs to remind the American people of the moral imperative of passing immigration reform and of the real human suffering that is present in today’s unjust system. In a new way, he must publicly call on Speaker Boehner to move on this critical issue and to fight against the globalization of indifference.

There’s no doubt that John Boehner, a Jesuit-educated politician, has tremendous respect for his Catholic faith and for Pope Francis. Just two weeks ago, he extended an invitation for the Holy Father to address both Houses of Congress during a potential 2015 papal visit to the United States.

But there is irony in this. Speaker Boehner—as religion writer David Gibson has rightly noted—invited a Latino man who cannot speak English to address Congress, but cannot find the courage to take up comprehensive immigration reform.

By putting Francis’s words front and center in the fight for immigration reform, President Obama can send a clear message: it is impossible to laud the pope’s moral authority while ignoring him on this crucial issue. Inevitably, this reality revealed would put Speaker Boehner in an increasingly uncomfortable position.

But framing immigration reform through the words of Francis can have a much wider effect. The universal leader of the Catholic Church is widely cited and praised in the halls of Congress by Protestants, Jews and atheists. In fact, the New York Times named Francis the most popular voice on Capitol Hill.

In the remaining months of the 113th Congress, President Obama must try to convince his political adversaries in the House to take up this crucial issue. President Harry Truman, facing similar opposition from Congress in 1948, was told to “give ‘em hell, Harry!”

A better solution in 2014 is an appeal to the gatekeeper of heaven. Give ‘em Francis, Barry.

And if it doesn’t produce a legislative victory, we can always–in the words of the pope—“beg the Lord to grant us more politicians who are genuinely disturbed by the state of society” this November.

Christopher J. Hale is a senior fellow at Catholics in Alliance for the Common Good. 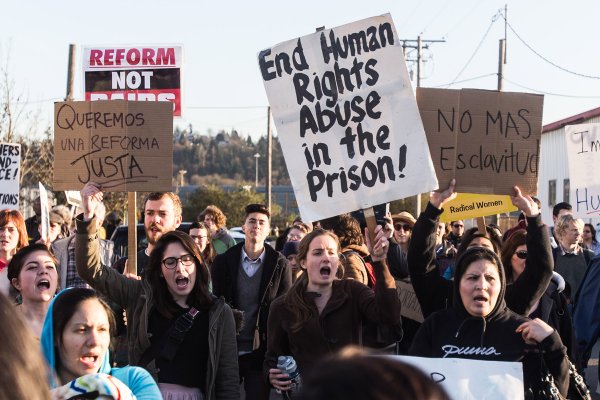