Marcy Borders, the Dust-Covered Woman in the Iconic 9/11 Photograph, Has Died of Cancer

Marcy Borders, a survivor of the Sept. 11 terrorist attacks and the subject of one of that day’s most iconic photographs, died on Monday of stomach cancer. She was 41.

On the morning of Sept. 11, 2001, Borders was one month into a new job as a legal assistant on the 81st floor of One World Trade Center. When American Airlines Flight 11 struck the building a few stories above her office, she fled, making it onto the street just as the adjacent tower collapsed. A stranger pulled her into a nearby lobby, where Agence France-Presse photographer Stan Honda took her picture: her face distraught; her body covered in ash. In the weeks and years following 9/11, the world would thusly know her as the “Dust Lady.”

Meanwhile, she found herself haunted by her experiences that morning, ultimately struggling with depression and substance-abuse issues.

“My life spiraled out of control. I didn’t do a day’s work in nearly 10 years, and by 2011 I was a complete mess,” Borders told the New York Post in June 2011. “Every time I saw an aircraft, I panicked. If I saw a man on a building, I was convinced he was going to shoot me.”

She checked herself into rehab in April 2011, eight days before President Obama appeared on television to announce the death of Osama bin Laden.

“The treatment got me sober, but bin Laden being killed was a bonus,” she told the Post. “I used to lose sleep over him, have bad dreams about bin Laden bombing my house, but now I have peace of mind.”

Borders was diagnosed with cancer last August. Speaking with the Jersey Journal a few months after her diagnosis, she ventured that her exposure to the pollutants emitted by the collapse of the World Trade Center may have contributed to her illness.

“I definitely believe it because I haven’t had any illnesses,” she said.

Read next: What We Can Learn From Behind-the-Scenes Photos of Dick Cheney on 9/11 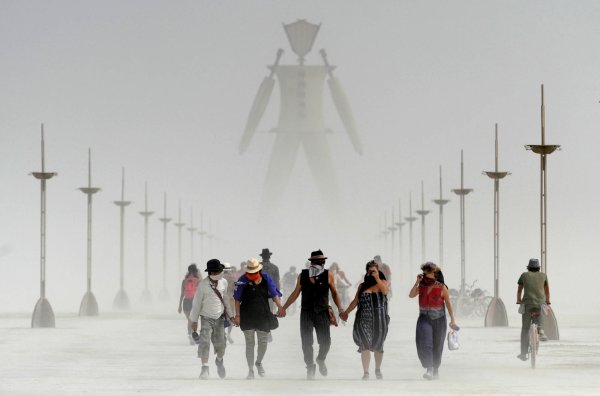 New Sheriff Overseeing Burning Man to Crack Down on Naked Rule-Breakers
Next Up: Editor's Pick