The largest U.S. electronics retailer reported a rise in domestic comparable sales of 3.8% for the second quarter, well ahead of Wall Street’s expectations, and posted a better than expected profit. While Best Buy has helped its cause by cutting costs and adding floor space to growing categories like smart homes, home theaters, and shops-within-a-shop for top brands, it has also been getting a lot of help from Apple and its roster of red-hot products.

“Demand for Apple Watch has been so strong in the stores and online,” Best Buy CEO Hubert Joly told Wall Street analysts on a conference call. The retailer expects to be selling the device, which hit the market in June, at all of its 1,050 big-box stores by the end of September, he added. Initially, Best Buy had planned to have watches in 300 stores by the holiday season. (It started selling the watches in early August.) Apple did not provide specific sales numbers for the watch in its second-quarter earnings last month, but Best Buy’s comments provide more evidence of the device’s success.

Joly also announced steps that will deepen Best Buy’s relationship with Apple. It is currently updating its Apple shop-in-shops at 740 stores, including new fixtures and more display tables for phones, computers, and tablets. The work is already complete at 350 stores, and will be finished at another 170 in time for the key holiday season. He also said that Best Buy will begin selling AppleCare product service and support this quarter, and will start testing out being an authorized service provider at 50 stores.

Beyond Apple, there was a lot for investors to cheer: e-commerce sales grew by 17%, showing that Best Buy can hold its own against Walmart, Target, and Amazon.com, and suggests it has licked the “show rooming” phenomenon, where shoppers go to a store to browse and try products out, then buy them on Amazon, behavior that a few years ago led many to question Best Buy’s long term viability.

And in a development that should worry Sears, Best Buy reported strong appliance sales, a key driver of its comparable sales jump.

Still, Best Buy sounded a note of caution about the current quarter, forecasting U.S. sales to be flat or grow by a low single-digit percentage rate.

As for all the stock market drama of late? The jury is still out on whether consumers will pull back.

“It is difficult to know, though, if the recent volatility in the financial markets will affect overall consumer spending,” Chief Financial Officer Sharon McCollam said in a statement. “To date, however, we have not seen a measurable impact versus our original expectations.” 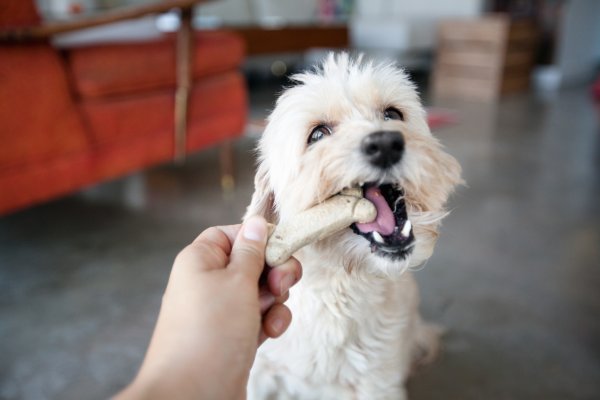 This Webcam Dispenses Treats For Your Dog
Next Up: Editor's Pick