Tomy Kwan, a 44-year-old trader at the Hong Kong Stock Exchange, came back from lunch on Tuesday happy, or at least calmer than he had been. The Hang Seng Index had plummeted 5.2% on Monday, bringing the market to its weakest point, by one measure, since the crash of 1987, but within an hour of opening on Tuesday it had soared more than 700 points. By the midday break, things had cooled but were still looking up, bringing a cautious optimism to an anxious trading floor.

“I made some money this morning,” Kwan said outside the doors to One Exchange Square in Hong Kong’s Central district. “I lost a lot of money yesterday, and last week, but I’ve made some back today. We’ll see.”

But by 3 p.m., the Hang Seng Index — the standard barometer of Hong Kong’s market performance — went south again, falling nearly 500 points, or down 1.04% from the opening bell. A sudden spurt of second wind at the end of the day pulled the index ahead, allowing it to close around three-quarters of a percentage point up, but traders left the floor on Tuesday afternoon looking somewhat dazed, blinking as they stepped into the smoggy sunlight.

Hong Kong is not alone in its volatility. The ongoing stock sell-off in mainland China has flamed panic in markets across the world. “Black Monday,” as the Chinese state media (in a rare moment of honest self-appraisal) called yesterday’s rout, encouraged the biggest sell-off in U.S. and European markets since 2011. As things got worse on Tuesday — by close, the indices in Shanghai and Shenzhen had fallen 7.6% and 7.1%, respectively — the rest of Asia followed suit, with India’s Sensex and the Nikkei in Japan both taking a tumble immediately after lunch.

However, while the markets of New York City and Tokyo are liable to recover, some experts worry that Hong Kong could be along for China’s downward ride. The political turmoil in this island city last autumn demonstrated that many Hong Kongers hold themselves proudly detached from the political and cultural influence of mainland China, but the ties between them, at least in economic terms, may be too tight to ignore.

“The closeness of Hong Kong market means that it moves more or less with the Chinese market,” Bernard Aw, a market analyst with IG Group in Singapore, tells TIME. “If you look at the Hang Seng market, 20% of it is Chinese companies incorporated in China that are listed in Hong Kong.”

In recent years, Aw says, China has used Hong Kong as a pawn in its efforts to open the country’s markets to foreign investment. Investing in Hong Kong, a bastion of free-market capitalism on the southern cusp of this self-proclaimed communist country, is easy, and therefore Chinese companies listed on the Hong Kong markets — comprising half of the overall market here — can avail themselves of foreign money. The Shanghai and Shenzhen markets draw domestic investment; Hong Kong bolsters that with investments from overseas.

In short, Hong Kong’s stock markets have subjected themselves to the dual currents of Chinese and global market trends. The apogee of its surge earlier this year — reaching its highest value since January 2008 — echoed the bullish run of China’s markets, which were also booming. Since June, when investors began to realize that the Chinese bubble was just that, Hong Kong’s markets have suffered accordingly.

“If we’re looking at a farther horizon — 12 to 24 months — there’s a chance for both markets to recover,” Aw says. “But in the near term, I see the trend heading south.” 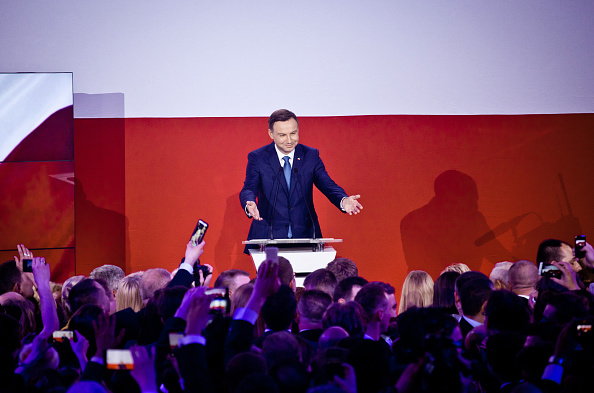 What to Know About Poland's October Polls
Next Up: Editor's Pick