How Astronauts Dock at the Space Station

Need a lift? A Souyz spacecraft after undocking from the space station on June 11, 2015
NASA
By Jeffrey Kluger

One of the trickiest questions for a Soyuz spacecraft approaching the International Space Station (ISS) is where to park. The ISS may be larger than a football field, but it’s got only so many ways to get inside, and with crewed spacecraft and uncrewed cargo ships regularly shuttling up and down, docking ports—or at least the right docking port—can be at a premium.

In the pre-dawn hours of Sept. 28, space station astronaut Scott Kelly, along with cosmonauts Mikhail Kornienko and Gennady Padalka, will be required to do a bit of delicate flying to sort just that kind of problem out.

The three crewmen arrived at the station on March 29, with Padalka slated to spend six months aloft, and Kelly and Kornienko scheduled for a marathon one year in space. They docked their Soyuz spacecraft at the station’s Poisk module—a 16-ft. (4.8 m) Russian node that was added to the ISS in 2009 as a science lab, observation point and egress compartment for astronauts embarking on spacewalks. It’s remained there ever since, and that’s a concern.

The five-plus months the ship has been hanging off the station in the alternating searing heat and deep freeze of orbital space can take its toll on the hardware, and since the crews rely on the ships as their way back to Earth, NASA and the Russian space agency, Roscosmos, instituted a rule: 180 days is the maximum amount of time a Soyuz can remain aloft before detaching and returning to Earth. But Kelly and Kornienko are set to stay for 365 days—which complicates their ride home.

MORE: TIME is producing a series of documentary films about the record-breaking mission to space. Watch them here.

Their Soyuz is not the only one that’s on hand. There’s another one for the other three crewmembers who are currently aboard. (Another NASA-Roscosmos rule: there must always be enough seats for everyone to be able to bail out immediately in the event of an emergency.) And on September 2, a third ship, carrying three more crew members, is set to arrive for a changeover of personnel. Not all docking nodes are equal—the Poisk is a better target since it faces Earth—and that requires a little juggling. Mission rules—to say nothing of basic physics—make the job a delicate one.

At 3:09 AM EDT, the complete Padalka-Kornienko-Kelly team will climb fully suited into their Soyuz. Technically, it does not take all three men to do the job. Padalka, who is one of the most experienced Soyuz pilots extant, has joked that he could fly the thing with two cabbages in the other seats. But in the event of Soyuz emergency requiring an immediate reentry, all three men must be aboard—lest a solitary pilot come home, leaving five people aboard the ISS and only three seats on the remaining Soyuz.

The crew will then undock from the Poisk and re-dock to the nearby Zvezda module, or service module—a straight distance of only a few dozen yards. But these kinds of orbital maneuvers require care, with both the station and the Soyuz orbiting the Earth at 17,133 mph (27,572 k/h) but moving just a few feet or inches at a time relative to each other.

“They’ll undock, then back out 200 meters or so,” says NASA TV commentator and overall space station authority Rob Navias. “Then they’ll fly around to the back end of the service module, do a lateral translation, fly retrograde, then move in for a docking at the aft end of the module.” If that sounds like an awfully complicated way to say, essentially, that they’ll back up, turn around and pull in at another door, it’s less techno-babble than it is a reflection of the complexity of even the most straightforward maneuvers in space.

Two of the newly arriving crew members will be only short-timers, staying on the station for just 10 days. They’ll then fly home with Padalka in the older ship, leaving the fresh one for Kelly, Kornienko and another crew member six months later.

The ISS may be the most complicated job site on—or off—the planet, but it’s one that could proudly display a sign reading “14 years without an accident.” Playing by all the workplace safety rules will help keep that record going. 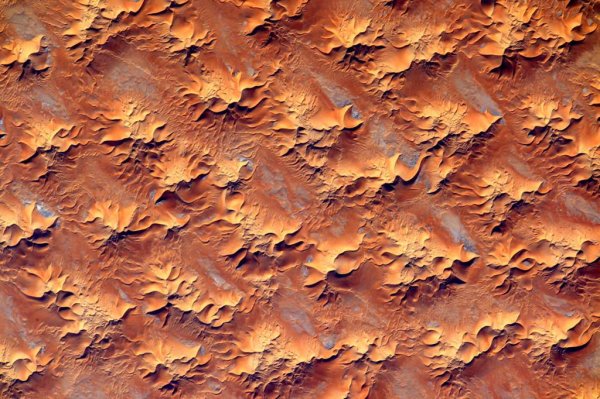 See the Best Photos From an Astronaut's Fifth Month in Space
Next Up: Editor's Pick