By Maya Rhodan and Arpita Aneja

In the days leading up to Aug. 29, 2005, the world was watching the Gulf Coast. On that day—ten years ago this weekend—Hurricane Katrina made landfall. It brought winds as strong as 125 mph, nearly a foot of rain, and a 25- to 28-ft. storm surge that destroyed levees in Louisiana, leaving thousands of New Orleans residents underwater and puncturing the soul of the south.

One of those people watching the gathering clouds was Chris Usher, who was at the time a freelance photographer covering the White House for TIME. He told his editor that he would be going down to the Gulf Coast whether the magazine wanted or not. She asked him to please wait, not to put himself in the storm’s way—but he wouldn’t listen.

“I was like, ‘No! I’ve got to be there when it happens, before it happens,'” he now recalls.

Usher packed up his “war-wagon”—a 1985 Toyota Land Cruiser equipped with a lift kit and a roof rack—and headed out. The very next day, he was driving on Interstate 55 in Jackson, Miss., when the storm hit. Driving through the weak side of the storm, he witnessed trees falling and heavy rain, but nothing about the journey hinted at the type of devastation he’d soon witness in New Orleans and in parts of Mississippi.

“Every day, I would walk amongst all of the wreckage and it was just insane. The smells—that’s one that you kind of wipe out and forget about, the smells, especially as it wore on, because I spent three weeks covering it, every day,” he says. “The first couple of days, you know, ‘So what?’ But then, in Gulfport, [Miss.], there were a whole bunch of semi-box containers, filled with chicken that got loose and that was rotting everywhere.”

Meanwhile, TIME’s Brian Bennett—who had reported from post-Sept. 11 conflict zones for TIME and had, at that point, recently returned from a stint as Baghdad bureau chief—was back in Washington, D.C. When Bennett heard reports that journalists on the ground were having difficulty accessing New Orleans, he called around to some helicopter rescue units he’d flown with in Iraq to see if any would let him tag along. A unit in Florida invited him to join them if he could make it to Jackson, Miss. That was how, a few days after the storm had swept through New Orleans, he found himself approaching the city by air. It was immediately clear that something was wrong. “Instead of streets you saw canals,” he recalls. “There was water in a lot of places and there was a lot of roof damage, a lot of debris, no car traffic, the streets were empty.”

Stories with Bennett’s reporting and Usher’s photographs populated the pages of TIME and TIME.com in the days and weeks that followed. In one, Bennett wrote that the helicopter crew wasn’t the only thing the experience shared with his time covering a mission near the Persian Gulf rather than the Gulf of Mexico. Seeing New Orleans was like seeing “Baghdad on the Bayou”:

Bennett, who is now a writer at the Los Angeles Times, quickly realized that the landscape of the city would be changed for many years to come. “It was really difficult to see these people’s homes destroyed, emptied out by the tide, these floodwaters that came in and swept out all their belongings, the mold taking over their homes and the places they’d lived for generations in some cases,” he says. On a visit to New Orleans last year, his prediction was proved true: though some neighborhoods seem untouched, he says that other places—even where rebuilding has happened—are just not the same.

For Usher, the emotional impact of covering the devastation was overwhelming. “In a weird way, I was very numb at first and then I was very highly engaged in it and it was draining,” he says. “Especially when you come up on something that’s kind of identifiable—maybe a family photo…or stuffed doll. And then you go ‘Man, that was some little girl’s favorite doll, what happened to her?'”

Even when he returned home after three weeks in New Orleans, feeling that his numbness meant he could no longer do the story justice, the experience made him want to continue documenting the lives of Katrina survivors. He and his wife spent the past decade traveling across the country, finding survivors of Katrina where they were and sharing their stories—particularly the less inherently dramatic ones, the stories that got less attention but might resonate with a larger number of people. The images he’s captured will be on display at a gallery in New Orleans this fall.

“Everyone goes for the jugular when it’s coverage. You want bang for the buck. You want that typical person who’s in the trailer and is not getting FEMA help and whatever. But there’s another side,” he says. “There’s always another side.”

(With reporting by Lily Rothman) 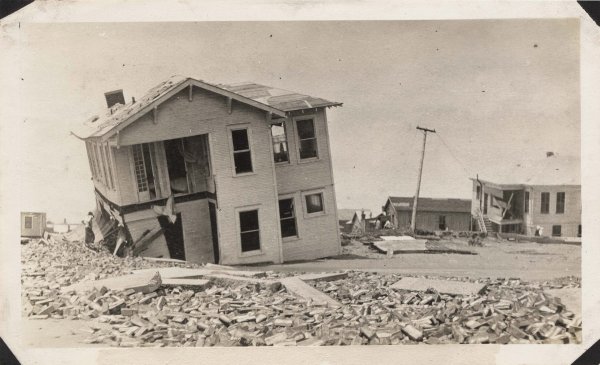 See Photos of Historic Hurricane Destruction
Next Up: Editor's Pick