Stephen Colbert has already given viewers a taste of what they can expect from the first week of The Late Show, beginning Sept. 8: Republican presidential candidate Jeb Bush and perennial A-lister George Clooney will grace his couch on night one while Kendrick Lamar provides musical entertainment the following evening.

Now CBS has released the rest of the first week’s lineup, and it’s a veritable potpourri of writers, entertainers and business executives. For his second show, on Sept. 9, Scarlett Johansson and SpaceX and Tesla Motors CEO Elon Musk will pay a visit. On Sept. 10, Colbert will interview Uber CEO Travis Kalanick, with a performance by Toby Keith. And on Friday, Sept. 11, Amy Schumer and Stephen King will round out the week, with musical guest Troubled Waters.

If Colbert’s first week at the helm of the late night empire is any indication of what’s to come, we can expect to see more interaction with musical guests—as his lineup suggests that he will interview musicians in addition to their performances—as well as a healthy mix of guests from inside Hollywood and beyond. 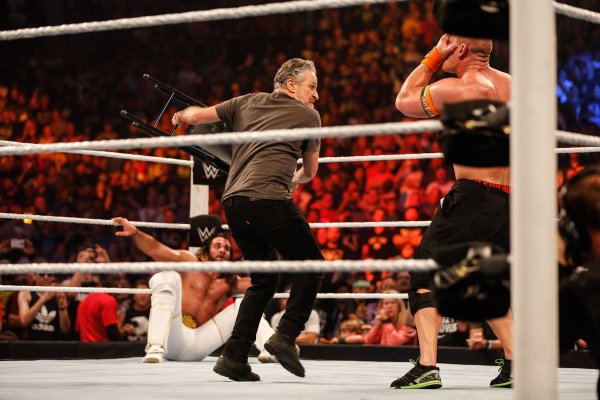 Watch Jon Stewart Hit a WWE Wrestler With a Chair
Next Up: Editor's Pick