The global market carnage carried over into another session Monday, as U.S. stocks plummeted again as soon as morning trading began after Chinese stocks continued their plunge, sparking another worldwide sell-off.

The Dow Jones industrial average opened trading down more than 1,000 points, or 5%, but was lately working off those heavy losses. The index was down 1,089 at the session low, and it fell below 16,000 points for the first time since mid-October. Dow futures were down more than 700 points ahead of Monday’s market open, and the blue chip index is now more than 2,200 points behind where it started the year.

The Nasdaq composite index also plunged dramatically once trading kicked off, dropping over 400 points, or more than 8%. The S&P 500 quickly fell more than 100 points, or about 5%.

In an attempt to dampen the effect of market volatility at the opening, the New York Stock Exchange on Monday invoked the rarely-used Rule 48, which allows the exchange to open trading without price indicators

U.S. stocks on Monday picked up where they left off last week, when all three major indices fell by roughly 6% and the Dow lost more than 1,000 points over five days.

As was the case with last week’s sell-off, Monday’s decline comes amid fears over the struggling economy in China, where the Shanghai stock exchange had its worst day of trading in roughly eight years, falling 8.5% on what has been dubbed “Black Monday.” The financial troubles in China compounded fears that the country’s government may not be able to deliver on its promise of a “soft landing” for its economy, which led to stocks falling in other major global economies on Monday.

“Until we have some sign that China and the emerging markets aren’t being sucked into some vortex from which they can’t recover … it is unlikely this selloff will stem,” Mark Luschini, chief investment strategist at Janney Montgomery Scott in Philadelphia, told Reuters.

London’s FTSE 100 and Germany’s DAX each fell by nearly 4% on Monday and commodity prices continued their recent slide, with U.S. crude oil prices dropping below $40 per barrel to hit a new 6 1/2-year low. 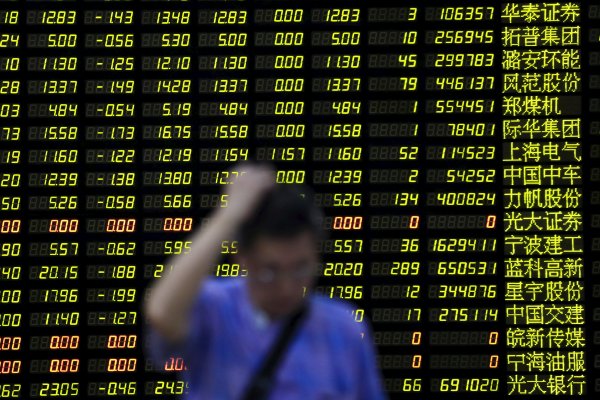 Silicon Valley Is Getting Hammered by the Global Selloff
Next Up: Editor's Pick