Why Silicon Valley Is Getting Hammered by the Global Selloff

An investor stands in front of an electronic board showing stock information at a brokerage house in Shanghai on Aug. 24, 2015
Aly Song—Reuters
By Kevin Kelleher

Last week was a relatively quiet one for tech news. So why, in a week when the S&P 500 suffered its biggest decline in 18 months, were technology stocks being hammered especially hard?

The question takes on a new relevance as US markets brace for new declines. The real culprits behind Wall Street’s turmoil last week—primarily, tumbling Asian stocks and slumping commodity markets—only became worse over the weekend. Should tech investors brace for even worse declines ahead? The near-term answer seems to be that they should.

During the past five trading days, the S&P 500 index fell 5.7%. Overall, technology shares were hurt by the selloff even more, with the NASDAQ Composite Index—more heavily weighted with mid-sized and large-cap tech companies—down 6.7%.

The biggest names in tech suffered even worse declines than the NASDAQ. Microsoft fell 8.4%. Apple and Facebook both fell by 8.8% Yahoo fell by 9%. Twitter, already having one of its worst months in the stock market, fell 11%. Google was one of the few large-cap tech shares to fare better than the NASDAQ, but it still declined 6.6% last week.

None of these companies announced any grim development that could have triggered a selloff last week. Instead, they are caught up in a downdraft of selling that was triggered by events well beyond Silicon Valley—continued collapse of the Chinese stock market, the prolonged slump in global commodity prices, and the erosion of currency valuations against the dollar in emerging markets.

These days, the most successful tech companies are global enterprises, so it’s not surprising that they would be affected somewhat by turmoil overseas. After all, these external factors have been haunting tech companies for months. Weaker currencies abroad, for example, are tied to a strong dollar, which can erode overseas revenues of multinationals.

But even so, big tech had been seen as a safe haven amid the global turmoil. Yes, Apple has exposure to China, but Facebook and Netflix don’t. And besides, Apple and Microsoft offer the kinds of dividends investors seek out in uncertain times. And nearly all of them were promising years of growth from the business models they helped pioneer.

Hence the vexing question: Why would they be sold off more harshly than other sectors where multinationals dominate? Some of the easy answers aren’t satisfactory. Yes, trading is seasonally light in August, but these are some of the most actively traded stocks. Yes, some like Netflix are overvalued, but Apple and Microsoft have P/E’s of 12 and 16, respectively—below the S&P 500’s ratio of 20. So why has Apple officially entered bear territory?

There is another explanation, having more to do with what may be a shift in the mindset of investors who grew accustomed to expecting high-growth from tech companies. Currency crises and panics in large overseas markets may not have anything directly to do with whether Americans will buy more smartphones, but they can signal big shifts in financial cycles.

Nobody is sure yet whether what happened last week was a correction or the beginning of a new bear market. Corrections are unpleasant but usually temporary—and they are often necessary before promising stocks can advance higher. But a bear market, which the US stock market hasn’t seen in six years, would slow down revenue growth and potentially even the profits.

And that’s what’s most likely worrying investors. This is an old bull market, ready to be put out to pasture. And the overseas turmoil may be, if you’ll allow the mixing of metaphors, the straw that breaks the aging bull’s back.

In other words, the tech selloff last week may reflect a growing sense of nervousness among large fund managers that have been buying not just publicly traded shares like Apple and Google, but investing in private rounds of newer companies like Uber and Airbnb with an aggression never seen before in previous tech bull markets.

These private tech companies–called unicorns because a billion-dollar valuation for a private startup was once unheard of (although now there are 131 of them)–don’t have financial data available to public scrutiny. It’s hard to know which of them are even close to making a profit. Or, more crucially, whether they have enough cash to carry them to profitability should the economy slow down in the future.

Individual investors have been largely shut out of investing in these companies, but institutional investors like mutual or private-equity funds have bought into them on a scale that wasn’t even dreamed of during the dot-com boom. And after last week, those fund managers may be wondering if they overextended themselves in the tech sector by gorging on these private rounds.

If the selloff is more than a correction—that is, if it’s a true bear market—many funds could be left having to write down losses from these private investments when their valuations drop. And unlike stocks in the public market, privately held shares are much harder to sell because they are illiquid. Some funds may already be selling their public tech shares at a profit as a hedge against this risk.

A few venture capitalists have been warning about this danger for a while. Bill Gurley of Benchmark, a veteran of the dot-com crash, has been sounding for a while like the VC version of Cole Sear, saying he sees dead unicorns this year. Last week, noting the drop in tech stocks, he warned again that investors would soon shift their focus from revenue growth to profitability. Others joined him in predicting zombie unicorns.

These warnings are coming from VCs who, unlike the rest of us, are in a position to see the financial health of many private tech companies. The day may come when the small investors who were barred from buying shares in these so-called unicorns are glad they never had the chance. In the meantime, the mere prospect of dying unicorns seems to be scaring fund managers. Scaring them even more than what’s happening in China. 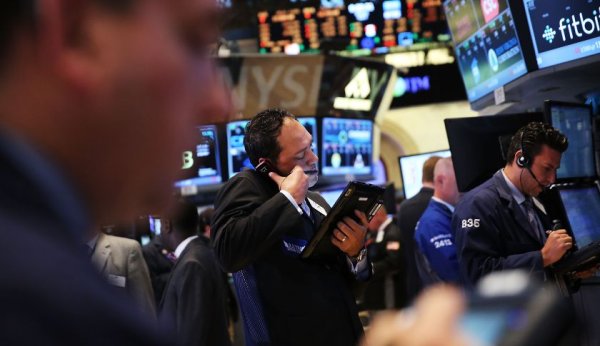 Stocks Tumble on Global Growth Fears
Next Up: Editor's Pick