Emergency services and crash investigation officers continue to work at the site where a Hawker Hunter fighter jet crashed onto the A27 road at Shoreham near Brighton, U.K., Aug. 24, 2015.
Luke MacGregor—Reuters
By Megan Gibson

Authorities are expecting the death toll to rise to around 20 after a Hawker Hunter fighter jet taking part in a British airshow, near Brighton, crashed into a busy main road and burst into flames.

The initial death toll reported on Saturday was reported to be seven people with more than a dozen others injured. On Monday, the BBC reported that at least 11 people are believed to be dead, but authorities are expecting to recover more bodies after the jet is removed from the crash site. In addition to vehicles on the road, Sussex Police’s assistant chief constable, Steve Barry, told the BBC that there were many cyclists and onlookers along the busy stretch of road where the jet crashed, which has made determining an exact number difficult.

Barry told the BBC, “The number of highly likely dead remains at 11, but may rise. However, we do not expect that figure to be greater than 20, probably fewer.”

An onlooker told the BBC that the crash took place just after the jet pilot had began his demonstration. “He’d gone up into a loop and as he was coming out of the loop I just thought, you’re too low, you’re too low, pull up,” Stephen Jones told the BBC. “And he flew straight into the ground either on or very close to the A27, which runs past the airport.”

A crane is expected to remove the jet wreckage from the highway. 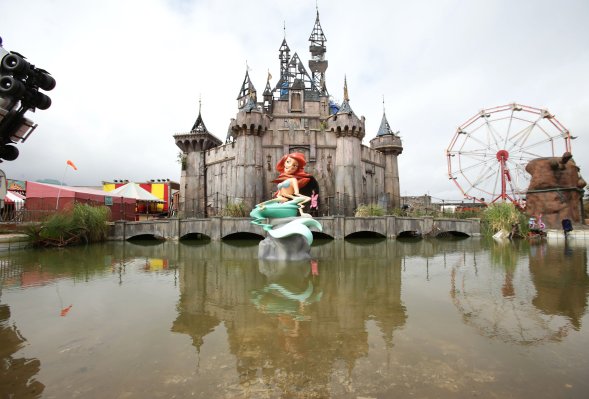 Welcome to Dismaland
Next Up: Editor's Pick