Six people, including a state legislator, were killed in India early Monday morning after a truck transporting granite collided with a train.

The crash took place at a railway crossing in the southern town of Anantpur, the Indian Express newspaper reports.

The truck was unable to stop at the crossing because of a brake failure, local police said, and crashed through the gate into a carriage of the Bengaluru-Nanded Express. Three other carriages were derailed and five people inside the compartment — including Venkatesh Naik, a lawmaker from the southern state of Karnataka — were killed as a result of the impact. A passenger in the truck also died, while the driver narrowly escaped with his life.

“The truck driver jumped out seconds before the impact and fell unconscious but survived and he has been questioned,” a police official told reporters.

Monday’s incident is the third railway mishap in as many years at Anantpur as well as the second involving the Bengaluru-Nanded Express — a fire broke out on the train in December 2013, killing 26 people, while 25 passengers of another train called the Hampi Express died in 2012 when it jumped a signal and crashed into a freight locomotive.

It is also the second Indian railway disaster in two days, after three carriages of a goods train derailed in the northern region of Jammu and Kashmir. The derailment took place due to a “technical snag,” a local official told the Press Trust of India news agency.

One of the largest transportation networks in the world, the Indian railway system spans the length and breadth of the country and is a vital mode of connectivity. In the absence of modernization and adequate safety measures, however, tragedies like the twin train derailment that killed at least two dozen people earlier this month have become all too common.

Enhancing the structure and quality of India’s ailing rail network has been one of the main priorities of the Indian government under Prime Minister Narendra Modi, which announced in its rail budget earlier this year that it would invest $137 billion over the next five years to improve passenger safety and track quality, among other things.

India’s Railway Minister Suresh Prabhu called Monday’s crash an “unfortunate accident” in a post on Twitter, and announced that families of the victims and other injured passengers would be compensated. 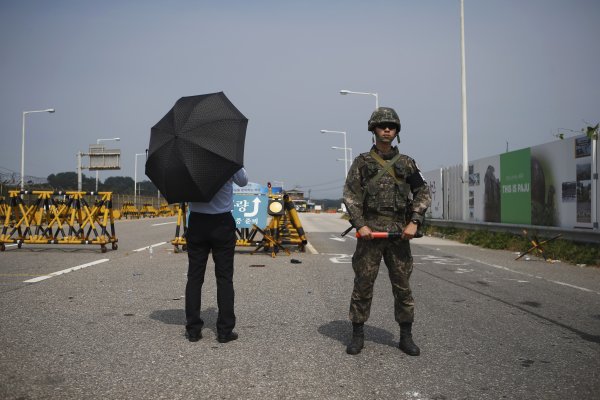 China Absent as Koreas Engage in Tense Negotiations
Next Up: Editor's Pick