Defeating Terror on a Train: What the U.S. Heroes Proved

What does it tell us that three unarmed men—including a pair of U.S. military personnel—won the latest battle in 21st Century warfare?

The heroics of three California buddies may offer an insight into the evolution of war. No one is arguing that state-on-state warfare has gone the way of the cavalry, but Friday’s clash aboard a train in Belgium should lead to some questions about continuing investments in high-tech, high-cost weapons and counter-terrorism efforts.

The U.S. military increasingly finds itself battling poorly-trained, barely-equipped militants armed with little more than will and ideology. Too often, it seems, will and ideology trump GPS smart bombs and laser-guided missiles fired from fleets of unmanned drones and fifth-generation warplanes.

As Airman 1st Class Spencer Stone, National Guard Specialist Alek Skarlatos and Anthony Sadler detailed how they took down Moroccan native Ayoub El Khazzani on Sunday at the U.S. embassy in Paris, the Pentagon issued its daily press release detailing the latest air strikes against targets in the Islamic State of Iraq and Greater Syria.

The contrast between futility and utility was bracing. The Pentagon’s target list was the latest in a year-long series of sorties that—despite Pentagon protests to the contrary—shows little signs of progress. In contrast, the train takedown represented a quick victory that won congratulations from around the globe.

“Airman Stone and Specialist Alex Skarlatos are two reasons why—on duty and off—ours is the finest fighting force the world has ever known,” Defense Secretary Ashton Carter said in a statement. “These men are heroes,” added Air Force General Philip Breedlove, the top U.S. military officer in Europe. President Obama telephoned the men to thank them, and French President Francois Hollande presented them with the country’s Legion d’Honneur medal on Monday.

The three were aboard a Paris-bound train packed with more than 500 passengers late Friday when an armed Khazzani stormed into their car, after firing a shot in another carriage. “I turned around and I saw he had what looked to be an AK-47, and it looked like it was jammed or wasn’t working,” Stone said.

“He clearly had no firearms training whatsoever,” said Skarlatos, 22, who has just finished a tour in Afghanistan. “If he knew what he was doing, or even just got lucky…we would have all been in trouble and probably wouldn’t be here today—along with a lot of other people.”

The fumbling proved the undoing of Khazzani, 25. “Alek just hit me on the shoulder and said ‘let’s go’ and ran down, tackled him,” Stone said. “We hit the ground.” Stone, 23, put the attacker in a chokehold, who responded by slashing Stone in the neck and hand with a box-cutter, the same weapon used by the 9/11 hijackers. The three, aided by Briton Chris Norman, ultimately subdued Khazzani. He is now in custody; one of his lawyers says he claims to be a would-be robber, not a terrorist.

Armed with the AK-47, nine clips of ammo, a pistol and the box cutter, Khazzani could have killed dozens of train passengers. More strikingly, he was able to get aboard the train with his arsenal despite appearing on the terrorism warning screens of three countries—Belgium, France and Spain—as a possible risk. French Interior Minister Bernard Cazeneuve said Saturday that Khazzani was believed to have been a member of “the radical Islamic movement.”

—The hundreds of billions of dollars the West’s militaries and counter-terrorism agencies have spent since 9/11 to combat radical Islam (or radical Islamists masquerading as train robbers) can’t defeat an ideology. So long as a few Islamic leaders incite their followers to attack Western targets—and some do so—no investment can do that.

—If Islamic militants are determined to launch lone wolf attacks that threaten everyone in the West, everyone in the West is on the front lines. The solution isn’t to put undercover soldiers wherever the public gathers, or to arm every civilian. Instead, it simply requires donning a new mindset. Ever since the 9/11 attacks, airline passengers have no longer been willing to give strangers the benefit of the doubt if they appear threatening. Such an attitude will become more common, in more places, so long as such attacks persist. Importantly, as Friday’s outcome shows, attackers are not invincible. “Basically, in times of crisis…do something,” Sadler, 22, said.

—Lone wolves, even operating in packs, generally can’t cause massive death and destruction. While this is no solace to those caught in their sights, it needs to be emphasized to keep things in perspective. The corollary also should not be forgotten: keeping nuclear materials from terrorists is vital.

—A balance needs to be struck between those attacking and those who talk about attacking. Even as the trio conducted their press conference, U.S. and allied warplanes were flying bombing runs against targets in the Islamic State of Iraq and Greater Syria. The West will never be able to kill all of those eager to declare their willingness to kill Westerners. Continuing Western attacks against such targets could do more, in the long run, to spur Islamic recruits to launch more attacks. The West, and the greater Islamic community, must do more to wean Muslim fanatics from violence without fanning their fervor.

—Industrial warfare—where nation-states produce tanks, ships and aircraft (as well as youth) in an effort to defeat one another—is ebbing. That’s happening because of U.S. supremacy on the battlefield, and greater economic interdependence among nations. Industrial warfare isn’t going away, but it looks increasingly like terrorism will remain atop the national-security to-do list for the foreseeable future.

—Any deliberate move away from industrial warfare will have powerful opponents, including those who produce the armaments found on the modern battlefield, and those who have spent careers training young warriors how to use them.

Friday’s fight on the high-speed Amsterdam-to-Paris train can be viewed a miniature version of the clash of civilizations that some fear may now be unfolding. If so, Sadler, Skarlatos and Stone stepped up to the plate. “He seemed like he was ready to fight to the end,” Stone said of Khazzani. “So were we.”

Read next: Americans Recount How They Subdued Gunman on French Train 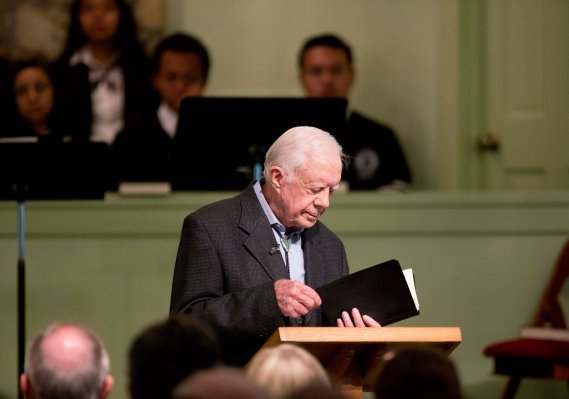 Jimmy Carter Does Double Duty at Sunday School After Sharing Cancer News
Next Up: Editor's Pick