Jamaica's Usain Bolt celebrates after winning the gold medal in the men's 100m ahead of United States' at the World Athletics Championships at the Bird's Nest stadium in Beijing on Aug. 23, 2015.
Wang Lili—Xinhua Press/Corbis
By Sean Gregory

Mark it on your calendars now: August 14, 2016, Sunday night in Rio, the date of the 100-meter final of the Olympic Games. If this Sunday’s world championship is any kind of teaser, it could be one of the most riveting ten seconds in the history of sports.

Usain Bolt, winner of the 2008 and 2012 Olympic golds in the 100, on Sunday beat American Justin Gatlin, who took the event at the 2004 Games in Athens, by one one-hundredths of a second at the Bird’s Nest in Beijing, site of Bolt’s word-record setting performance at the 2008 Olympics. Bolt would later top that 9.69-second time at the 2009 Worlds, when he ran a 9.58, and at the London Games, when he set a new Olympic record of 9.63 seconds.

This was Bolt’s third World Championship victory. And though it seems far-fetched to label any Usain Bolt victory an upset, this was drenched in surprise.

That’s because Gatlin, a controversial figure in track circles who served a four-year doping ban from 2006 through 2010, hadn’t lost in 28 races, since September 2013. He was the fastest man in the world in 2014 and 2015. Critics have called the success of Gatlin, 33, bad for the sport, since he’ll always compete under a cloud of suspicion. As Great Britain hurdler Dai Greene told the BBC last year, speaking about Gatlin’s quick times:

Meanwhile, Bolt had struggled coming into the World Championships. He had foot surgery in 2014 and pulled out of a pair events his season with a leg injury. His fastest 100-meter time this year was 9.87 seconds, blazing for most humans, a summer slog for Bolt.

But as usual, Bolt peaked when he needed to. He and Gatlin cleared the field for the last 30-meters or so, but Gatlin tightened up: a last lunge gave the Bolt the photo-finish win.

The good (Bolt) vs. evil (Gatlin) storyline going into this race was irresistible, yet oversimplified. Gatlin has paid his debt, and minus fresh evidence that he’s cheating, you can doubt him, but you can’t dismiss him.

Bolt’s final act is way more compelling. This is a man with nothing else to prove, who’s the greatest sprinter of all time. He’s been hurt, has every excuse to lose motivation, get distracted, and fade. And yet he summons, on command, breathtaking performances time and time again.

“This is Usain Bolt’s best race ever” American sprint legend, and BBC commentator, Michael Johnson said afterwards. When it comes to Bolt, that’s a familiar refrain. Seven years after shocking the world at the Beijing Olympics, the best could still be ahead of him.

See you next August. 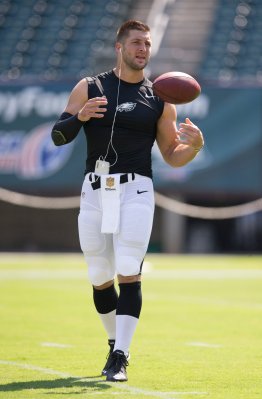 Tim Tebow Breaks Up Fight Between Eagles and Ravens
Next Up: Editor's Pick